Liverpool 1, Wigan 1: Regression to the Mean

Share All sharing options for: Liverpool 1, Wigan 1: Regression to the Mean 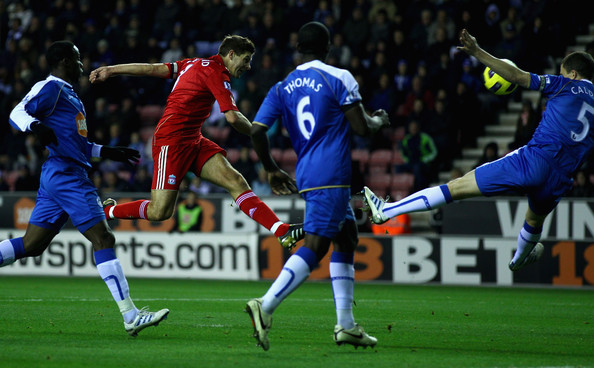 The rage. It returns.

Let's talk about the excuses that everyone will make, and then discount them.

The players in squad were tired. Yes, they were. But rotation is a no-no, it's something to be scoffed at, something RAFA did. But it's also a necessity when there's three matches in six days.

Wigan are an up-and-down club. Also a good point, Roy apologist. I made this point myself. But I'd guess they're 100% on the up when the side they're playing sits back, invites pressure, and is content to try to scrape a draw or a one-goal win.

Roberto Martinez is a brilliant young coach. Damned sure he is. A good tactician, solid player's manager, and an all-around likeable guy. But, certainly with no offense to him, does it take a great tactician and keen footballing mind to attack a side that has their striker making tackles on the edge of the 18-yard box?

Hugo Rodellega and Charles N'Zogbia are dangerous. Good point. They're especially dangerous against a side who's instructed to invite them to do exactly what they do best.

So this is me extremely disappointed. I had started to convince myself that after Sunday, Liverpool were growing in confidence, Roy was adapting to his squad, that the final 45+ against Chelsea was just some nervousness. First time since the Arsenal match that the squad had been in a place to win a big match, and everyone got a little tight. The opening ten minutes did nothing to challenge this.

And then the rest of the match happened. Liverpool sat deeper and deeper, and Wigan looked more and more dangerous. You're lying if you think that Liverpool were deserving of anything more than a point. Wigan completely dominated every facet of the match after Torres' opener, and it's a marvel they weren't level by the break. It's a marvel they weren't leading at the break.

Credit to Wigan, who really did do their best to break through, and probably should have come away with all three points today. It's a marvel they didn't win. Liverpool were truly threatening only twice after they took the lead---once when Gerrard, Dirk Kuyt, and Torres combined for a nice touch-and-go soon after the go-ahead, and when Gerrard hit the underside of the bar late in the match. Gerrard was able to find Torres late near Wigan's goal, but the striker's knock-back fell harmlessly in front of Al-Habsi and spun out of bounds. It was all too familiar---out of ideas and out of time.

Sadly for Roy Hodgson, there's no hiding from the fact that Liverpool went into a shell after Torres scored. Absolutely no way around it. It was a completely different side, and even worse, there was no adjustment made at the half. Yes, he brought Raul Meireles off and Jonjo Shelvey on, but as we've seen so often this season, the personnel are inconsequential. I'm convinced that Roy Hodgson could have a World XI playing Northampton Town, and if they stick to the tactics, they're bound to scrape a 1-0 win at the most.

The worst part is that we'll have to wait to hear any number of the excuses listed above. We'll hear how fortunate Liverpool are to have gotten the point. About how valiantly the lads fought against Wigan. Against themselves. Against fatigue. Against the odds. Famous draw.

It would be different if we could collectively come away feeling like Liverpool really gave it a go---like they pressed, like they sought a chance to bury Wigan, like they were doing anything other than just trying to survive. I think we all know that's not the case.

Anyone's guess what happens between now and Saturday, although I'm inclined to say "not much." The excuses will be made, tough point away from home, tired squad, etc. etc.

But, as Red2Death said in the comments of the matchday thread, we're only "watching our team being suffocated from the inside."