The Art of Silencing Roy Hodgson

Share All sharing options for: The Art of Silencing Roy Hodgson 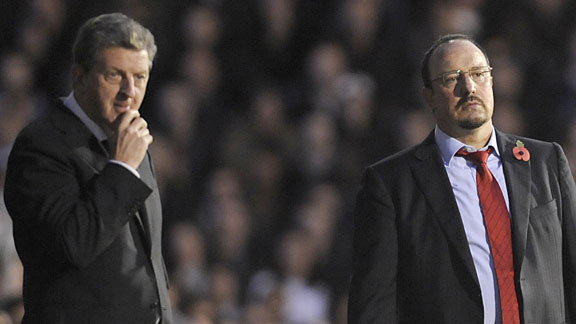 "I feel that Mr. Hodgson, he doesn't understand."

Normally I wouldn't bury anything of Noel's, but I want to make sure this is up in full as soon as possible. It's fantastic, it's on point, and it's everything we've been wishing someone with a microphone would say.

Roy Hodgson really has no reason to continually be taking shots at Rafa, and yet he's managed to do so at least twice in the last week. Swipes at the players he brought in, at his treatment of Kenny Dalglish, and at the state in which he left the club. All inaccurate, of course, but published and nurtured as valid by an adoring press nonetheless.

Good timing, then, for Rafa and Inter to be back in England for the Champions League. From the Guardian:

"I think that Mr Hodgson, he doesn't understand. Every single press conference is even worse than the last one. He's talking about things that he doesn't know. And some people cannot see a priest on a mountain of sugar.

"Maybe he hasn't been in Liverpool too long. We gave the fans their pride - again. We fought for the fans, we fought for the club and we fought for our players. So maybe he cannot understand this. I brought back Kenny Dalglish to do a role in the club and Christian Purslow gave him another role. He (Hodgson) doesn't know but I will explain it to him.

There's video here from Sky Sports, which is worth taking in, and that's about it, because every other outlet has labeled this as another "cryptic rant" or treats Rafa as though he's foaming at the mouth.

For me it's clear as day, and those around here will likely feel similarly. Nothing "cryptic" about stating the fact that Roy Hodgson absolutely can't see what's right in front of him, and there's nothing bizarre about underlining the importance of fighting for the fans and the club. Let's not pretend this is some wild lashing out, either---he was always going to be asked about Liverpool upon his eventual return to England, and Hodgson's pathetic digs at him in the past week made it all the more likely.

So well done to Rafa, and if Roy Hodgson has any semblance of a clue, he'll do exactly what Rafa suggested---keep his mouth shut and keep working to move the club forward instead of passing the blame every other breath.