Share All sharing options for: UPDATED---Liverpool 1, Bolton 0: Scraping By 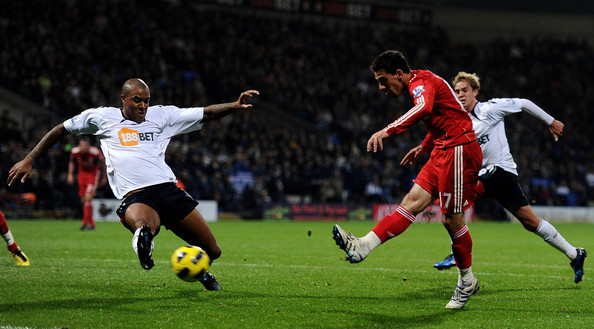 Maxi Rodriguez's late goal lifts Liverpool to all three points at the Reebok.

We can't talk about this one without underlining the fact that this was dangerously close to another 0-0 or a 1-0 to Bolton. Same stuff from Roy for most of the match---strange tactical choices, no adaptability, and largely disinterested and petulant on the touchline.

The moment of brilliance in the 86th minute wipes away a good bit of the sting, at least for now. Good ball from Lucas (who put in another good display until he was abandoned in central midfield) in to Torres, one of the better backheel services in recent memory, and a calm, if not fortunate, finish for Maxi past Jääskeläinen. Void of ideas for most of the second half, this was not a goal that resulted from tactical adjustments or mandated movement---this was basically the end result of Torres' genius and Maxi's finish.

But it's three points away from home, and it's hard not to feel good about it. I still don't think Roy's the man for Liverpool---if anything, today convinced me even more. On the heels of a better performance with the same eleven, they managed to underwhelm for most of the 85 minutes leading up to the winner, both individually and collectively. I doubt we'll see any immediate changes, and maybe that's fair on the heels of two wins and a good draw away in Europe. I'm not likely to be convinced that he should be sticking around, though.

As is typical, most of these thoughts are ones that have already been touched on in the comments section, but with a little time and space between the final whistle and now I'll move forward. Plus most of you are full of shit anyhow.

Strong Start, Settling into Something All Too Familiar

It wasn't exactly racing out of the gates, but for the first tape-delayed ten minutes or so I found myself feeling mighty optimistic. The clear-cut chances for Fernando Torres were most notable, and he arguably could have taken one, or both, to really get Liverpool going. It was maybe a bit unexpected, if only because I've been so dead-set on seeing a Hodgson-led Liverpool suck their collective thumbs while lying deep.

I wouldn't be disappointed, though, as Liverpool gradually sat deeper and deeper and saw less of the ball. At one point around the 35-minute mark, the on-screen possession stats for a 5-minute spell had Bolton near the 70% mark. It was right back where we started with Hodgson---memories of the win against Blackburn were wiped clean, and we saw it for most of the next 75-odd minutes.

This point was brought up by colso below, and might still be a little unfair to Torres, but bears repeating. Far and away Gerrard's worst performance of the season, especially in the first half. My wife, never hesitant to share her opinion, saw only two of his giveaways and quickly remarked, "he looks like he's fucking drunk. What's wrong with him?" The future mother of my child, folks.

She's entirely accurate, of course, as he sauntered around the pitch, wont to being dispossessed or spells of anonymity. For the man who's supposed to drive Liverpool forward, inexcusable.

As I mentioned above, I'm quicker to leap to the defense of Torres, who's heavily reliant on service and support from the midfield. He got it in the opening minutes, but it was no surprise that he was increasingly isolated and visibly out of it as Liverpool sat deeper and deeper. He can't avoid the "looks disinterested" comments, because he does at times, but I'm prone to blaming it on tactics more than petulance. We've seen that far too often from him in the past, although I'd be anxious to see his demeanor in a system that, you know, puts him in a place to succeed.

There needn't be any arguing about this point, because there's no counter for it---Lucas was, for the second match running, a vital cog in any successes Liverpool had today. There's a lengthier dialogue in the comments section below between Joel and Noel that's worth reading (also worth reading because at one point I get told I'm full of shit), so I just stole a couple of Joel's lines to highlight.

"Lucas MOTM. Great passing, great movement. Thought we controlled the center of the park well until Gerrard dropped back- his lack of discipline really showed.

"The best pass he hits is that 20-30 yard hard ground pass- it seems to float just over the grass with some zip then dies right at the target's feet. He reminds me a lot of Schweinsteiger- always lurking near the ball and keeping the play moving. He plays a lot like Busquets, but tends to get move forward more, where Busquets very rarely moves more than 10-15 yards from Puyol/Pique. I'm always surprised at how good Lucas is in the air though, he wins most headers unless the other guy is 6 inches taller.

He really is a true CM, rather than a DM or CAM. Playing him with another disciplined CM really brings out his strength, the difference in midfield between Lucas-Raul and Lucas-Gerrard was night and day. Lucas and Raul moved the ball up the field with short passes and movement, complementing each other. When Gerrard dropped into CM, he spent the half running around like a headless chicken, while Lucas was forced to sit deep to cover the spaces Gerrard left open."

On point to a word---Lucas has shone when given the chance, and hopefully the late substitution of Christian Poulsen for Raul Meireles isn't an indication of bringing the Dane back into the fray. To that end, Meireles was out of sorts after moving to the right and Poulsen was immediately awful. Roy Hodgson, match winner.

Skrtel and Kyrgiakos Continue to Impress

These two really have formed a solid partnership in central defense, and for me there's no reason to break them up in the near future. Unless that near future involves Daniel Agger; even then, though, I'd be willing to give this pairing a decent run. Jamie Carragher, maybe not so much.

One of the worries I had about these two was a lack of mobility, but they've proven to be more than capable of keeping things solid in front of Pepe Reina, and they're almost unbeatable in the air. I'm less inclined to believe the "if Kyrgiakos is one of the better players, Liverpool are really bad" crap simply because I think he's been mighty good. Yeah, Liverpool are struggling, but this pair and Reina make Liverpool awfully solid.

Nothing more to say that I didn't above---moment of brilliance, 80 or so minutes of Roy's fucknuttery.

But again, it's three points, it's Halloween, I've got beer and oven-baked pumpkin seeds, and "Werewolf Bar Mitzvah" is on repeat as I drunkenly throw Starbursts at the neighborhood kids. Life is good.

Have a nice night everyone, Noel's likely back tomorrow with a vengeance. Or something.