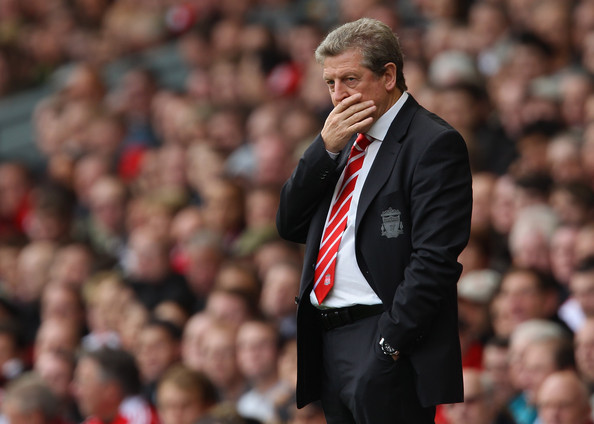 Blackpool live up to Ian Holloway's words and take it to Liverpool.

But is that really an accomplishment anymore?

A manager content to let things play out slowly and painfully, a group of players that look uninspired and disorganized, and a fan base so alienated from a club that's barely recognizable. It's sad, it's disappointing, and it's unbelievably painful. This is Liverpool.

I'm taking some time as usual, share your thoughts below in the meantime. Seems like there's plenty to say, but I either don't want to or can't find the words.

I continue to be amazed at how rational everyone is in the discussion in the comment board---thanks to all who have been around for keeping it civil and intelligent. As usual, some great points brought up by folks (at least that I skimmed over). Here's mine:

I'd be remiss if I didn't devote at least a paragraph to Ian Holloway and Blackpool. They did everything we've been dying for Liverpool to do from top to bottom---they had a defined approach, they knew who they were and what they wanted to accomplish, and they did exactly that. Holloway made no bones about how he would come into today's match, and it was clear that nothing was lost in translation between he and his squad.

Just a fantastic effort from them, and one fully deserving of three points. In the last fifteen minutes or so, I didn't even want Liverpool to score. It was clear who the better side was today, and an equalizer would have been unfair to the Seasiders. The word "jealous" comes to mind.

What more can I say? They were again atrocious in the first half, setting a new standard for their passive, meek style of play. Hodgson drew plenty of attention on himself with his petty and ridiculous defense of himself prior to the match, and he did little to follow through today.

He continues to make puzzling squad selections---Christian Poulsen's a lock, Raul Meireles wide right---and makes no adjustments to better the side. He was made to look like a complete fool by Ian Holloway; handed his opposition's plan of attack a week in advance, and he still couldn't get Liverpool prepared. Absolutely farcical.

He's certainly living up to the low expectations he set, though.

I may or may not have used this exact heading earlier in the season, but it's just as appropriate now as any other time this season. The squad's collective failings were clear (hence the loss), and individually it was no better. Yes, Fernando Torres came off injured, and while it might be heresy to suggest, I don't know what he does differently today.

David Ngog was among Liverpool's better performers, along with Meireles and Sotirios Kyrgiakos, but other than that it was another abysmal, disorganized display. The front four were a positional nightmare until Milan Jovanovic replaced Poulsen in the second half, but that did little to change the outcome. Joe Cole and Glen Johnson were particularly poor, but singling anyone out is needless. Just bad.

Flashes of promise, but overall very much the embodiment of Hodgson's derisive comments about the squad's quality.

Where to Go From Here

It's no longer a knee-jerk reaction to suggest that the futures of Liverpool and Roy Hodgson are no longer intertwined. He hasn't endeared himself to the club, been a nightmare in the press, and done little to defend his players from the media onslaught. Tactically he's shown the rigidity of a man who can't see past his own nose (and said as much yesterday), and as a commenter rightly pointed out, there's no place for that in the modern game.

Liverpool are in need of someone who can inspire them---as nate put it over at oh you beauty, "there needs to be a catalyst. Roy Hodgson cannot be that catalyst."

It's hard to agree with anything he's done or said, although at least his post-match comments seem a bit more grounded in the reality the rest of us are experiencing. Quite honestly, unless he's willing to make some major changes in his approach, even if he's "one of the most respected managers in Europe," I don't think he's part of the recovery effort.

Noel will be around tomorrow with a couple of posts, including some thoughts on the brilliant piece that justin linked to earlier about Rafa Benitez that ran in the Independent.

Have a nice end to the weekend, folks.