Share All sharing options for: Liverpool 2, Blackburn 1: Better As a Relative Concept 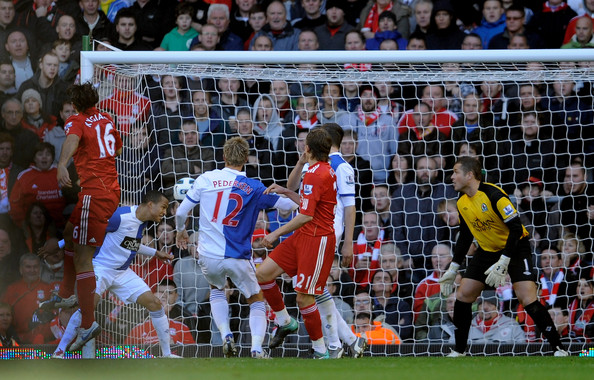 Liverpool get past Blackburn 2-1 at Anfield for their second league win.

Since it apparently became a thing after Thursday's scintillating 0-0 draw at Napoli, let me anticipate the "I told you so's" and "UR NOT A REAL SUPPORTER TWAT" comments---today was absolutely a better performance on the whole than matches gone by. It was better than the "best performance of the season" at Goodison, better than the only other win in league against West Brom, and even better than that famous European result midweek in Naples.

It's also a damned clear example that we're operating on some basement-level standards. In seasons past, a 2-1 result with a nervy final 30 minutes would have been nigh on failure. Yes, I know, Rafa burned the place down and pissed on the ashes before he left, and it's so noble of Roy to step in and try really hard like he's done. But to start to argue that today somehow indicates a revolution might be a bit premature---it feels good, yes, but it's still largely down to the fact that Liverpool have been atrocious. Sad to say, today was the anomaly.

To avoid all doom and gloom, though, I will say that it was something slightly different in a good way. We saw more pressure and activity from Liverpool today, and much of it was down to a more confident display in the midfield. To a man, Liverpool's midfield seemed to be firing on all cylinders. Maxi put in his shift of the season, Raul Meireles and Lucas were the partnership we'd hoped for, and Joe Cole gave indications that he's capable of shaking off his early season dip in form. And while he's been one of the better performers this season, Steven Gerrard was among the best on the pitch today and responsible for driving the team forward. The goal for Fernando Torres was a welcomed site, and his increasing influence was no doubt buoyed by the increase in pressure and service from the midfield.

I'm not anywhere near backing off the "Roy Hodgson Out" campaign---it's going to take much more than a win at Anfield against lower-table opposition that catapults Liverpool to 18th to convince me that he's got a clue. There's still plenty of problems left to solve, and, as I mentioned, so far today's the anomaly. Once we see Liverpool put together confident, positive displays on consecutive occasions, I'll flirt with the idea of maybe starting to think about pondering the concept that Roy Hodgson isn't a complete abomination. But don't worry, I'm still supporting my club.

I'm going to catch the replay on Fox Soccer Channel this evening and will have more thoughts later. Until then, share your infinite wisdom below while you get reacquainted with Liverpool winning a league match.