A Sad Day for Liverpool

Share All sharing options for: A Sad Day for Liverpool 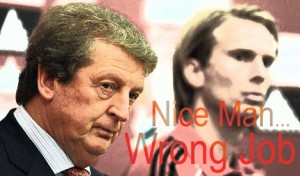 And I'm starting to wonder about the nice part.

Really, though, where do you go with a post-match postmortem when you could have written it a week ago and only inserted the particulars after the fact? We defended deep, we were passive, we invited pressure and barely had a pulse going forward. Insert details about when the opposition scored, when in the second half Liverpool showed signs of abandoning its defensive shape to push back, whether the first substitution came in the 76th or 77th minute, but otherwise just throw up last week's review. We know exactly what we'll get with Hodgson, and that is by far the most disappointing aspect of his regime. We also know we'll be treated to a painfully laughable bizzaro-world post-match interview wherein the current manager rambles on about how he's a wonderful coach who's happy with how the squad played.

I wish I was living in whichever universe he is, because it sounds like we played quite well in it:

"How's it possible to lose two-nil when the team's played as well as it did for such a large portion of the game?" he asks, before talking about how it's the best he's seen the team play since arriving, not realising just how damning that sounds.

"Then in the second half, we camp out in the Everton half and I think we play some very good football," he says, ignoring that that only happened because Everton decided to sit on their comfortable two goal lead and stop pressuring in the Liverpool end.

"My immediate thought is how can life be so cruel?" he asks, and I wonder if it's possible for any human being to be this deluded. Does he really, honestly believe the shit he's coming out with, or is it just the spin of a man desperately over his head trying not to drown?

He goes on: "Certainly we couldn't have put them under more pressure than we did." I wonder if he saw the first half, where nine Liverpool players camped out on the edge of their own eighteen yard box, inviting Moyes' well set-out Everton to defend from the front. For long stretches Everton threw three and four players into pressuring high up the pitch when they didn't have the ball, safe in the knowledge that with only Torres cutting a lonely figure up the pitch there was no way that Liverpool could hurt them even if such high pressure tactics left defensive holes. I think back to the match and wonder what the hell Hodgson was watching, because there was only one team for whom it would be fair to say that they couldn't have possibly put their opponents under more pressure, and it sure as hell wasn't the team in red.

Everton knew they could pressure high up the pitch and Liverpool would be too deep to punish them for it with a well played break or smart pass, and they flew out of the gates because of that. As poorly as Cole played, as poorly as Maxi played, as poorly as Gerrard played, and as much as Torres was a non-factor, it's all down to setting up so predictably and unconscionably deep. Liverpool looked poor, but to expect them to look good would have been to expect Torres to pick the ball up off Reina and run past seven defenders on his way down the pitch to the Everton goal.

And the only time Liverpool looked half way decent came when Moyes decided to sit back and shift to a counter game once his squad had things in hand. Liverpool just got handed a tactical masterclass by David Moyes, and if that seems as though it's setting the bar ridiculously low that's because it is. Sadly, that doesn't make it any less true: Moyes embarrassed Hodgson today, and the manager of Liverpool Football Club ended the day talking about how well he thought his team had played, which is nothing but one further embarrassment for himself and for all the fans and supporters after what took place on the pitch.

"There wasn't an awful lot wrong with our performance," he says. "What was wrong was just that Everton got the goals and we didn't."

He then went on to re-iterate that it would be a sad day if he were to take all the blame and end up sacked in the morning because of performances like this. Some in the media might decide to blame Torres for not picking up the ball direct from Reina and then beating seven Evertonians on route to a wonder-goal, and some might still try to blame Rafa for leaving the club with a squad made up of the second most players at the World Cup after Barcelona. Whether through xenophobia or a desire to see "their" manager succeed it amounts to the same bullshit at the end of the day, but the rest of us know that what will be truly sad is if Hodgson isn't the one held primarily accountable for these continually painful performances.

And in the end he came up with exactly the same thing we've seen week in and week out, and Everton was more than happy to take advantage of that. Moyes, apparently, isn't a complete idiot: he knew what was coming.

I think we all, when we weren't trying to trick ourselves into feeling optimistic about it, knew what was coming, too.

p.s.: you really, really do need to watch the whole exchange. Even if it's not especially pleasant. You should also check out the updated immediate aftermath thread if you missed that it was updated.