UPDATED---Everton 2, Liverpool 0: Why Yes, It Can Get Worse

Share All sharing options for: UPDATED---Everton 2, Liverpool 0: Why Yes, It Can Get Worse 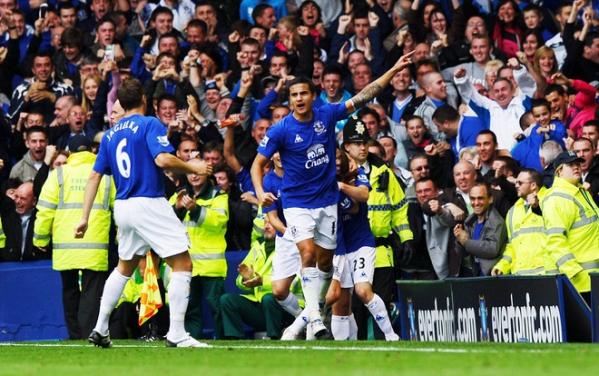 Everton breeze past a hapless Liverpool side 2-0.

Now is not the time to be rational.

Or, maybe it is, and it's just that being rational means being extraordinarily upset and angry with the type of football that Roy Hodgson has this team playing. It's the same thing every time. Well, not every time. They were flowing and free and beautiful against Rabotnicki, and that was certainly impressive. But this record's on repeat, the manager's convinced he's doing a good job, and the side is slipping further and further off the pace. But hey, he's all smiles and handshakes after the match and he's been doing this for awhile. No worries.

So for me, being rational is stating unequivocally that it's time for Roy Hodgson to go. I'm not chasing him with a pitchfork and screaming for his head, it's just about as close to fact as my opinions feel. Liverpool are going nowhere with him. Today's performance was just part of a growing body of evidence that nothing is changing for the better. I know he asked for ten matches in league, but there's no moving forward with Roy Hodgson in charge. Time's up.

Not sure what Noel has planned, but this will serve as a placeholder for my thoughts later on or will eventually be trumped by thoughts from Noel. Either way, leave yours below.

**UPDATED** Unfortunately it's more of the same in the comments---that's not to say the quality of folks' thoughts isn't any good. It's just the same song, same disappointments, and same seemingly on-point analysis that we've heard after all-too familiar poor performances earlier in the season.

I'm tempted to rant for awhile, but I don't know that there's much need, or that it would even be spontaneous enough to be authentic. It's disappointing more than anything, and what's worse is we were fairly able to predict it in the build-up. I was maybe a little more hopeful than others, but it proved yet again that, as noted above, Roy Hodgson isn't cutting it.

Some of you have made mention of his post-match comments, which are surreal to say the least:

"This was always going to be a difficult game to win. We suffered at the hands of an early onslaught, which you invariably do here at Goodison. They put us under pressure and made it difficult for us to get the ball, but towards the end of the first half we started to do better - we were starting to more than even the game out. I thought the shape of the team was good and I thought the quality of our passing and moving was good today.

"We had plenty of the ball in the second half and we were camped out in their half of the field in the final third for large periods. I thought we caused them plenty of problems, but you're never going to get the really clear one-on-one chances when teams are defending a two-goal lead. We are conceding too many goals and yet today I think we were a little bit unlucky to do so. Even in the good spell of pressure Everton had at the beginning, we weren't shipping goal chances. But it is a problem that we're letting in goals. We need to score goals to take pressure off the fact we could let them in, especially when you're playing with the sort of line-up we were at the end of the game.

"In particular today, one could argue with all the possession we had in the second half and the time we had in the final third, we should have scored because the possibility was there. We're not trying to disguise the fact this is a predicament or whatever word you want to use. For any team to take six points from eight games at the start of the season and go through that type of bad spell is a predicament. We don't in anyway try to deny that."

Little point in analyzing these thoughts, because a) that's pretty much been done by everyone already, and b) we're not dealing with someone who's got an adequate level of rational thought. There's so much wrong here. It makes going through the individual player performances, or even the way the squad performed collectively, a moot point. There were flashes of decency, periods of threatening possession, and indications that the group is capable of playing a brand of football that isn't completely helpless. As usual, those came far too infrequently and when it was far too late, as did any potential shake-ups from the top.

To borrow from Noel's comments in the matchday thread and Joel below, it was:

Noel:The real problem isn't the players, it's defending with two incredibly deep, passive banks of four, and the Everton playing an up-tempo pressure game when they don't have the ball. When three Everton players close you down at the edge of your own eighteen yard box when you get possession, you have a tactical problem and need to push your fucking lines up a bit. It might even mean Torres is less isolated if you do that, too.

Joel: Sit back and defend without pressing, which is never going to be successful. Roy is waiting so late for subs simply because he doesn't see a need to change things up- according to him, we're doing what he wants. Literally every single player on the pitch looks out of form, which simply isn't possible. The only explanation for how badly we're playing is the manager-bad tactics, bad teamsheet. Having 60-70 yards between centerbacks and striker simply won't work.

We'll go ahead and skip past the train of thought that's making the rounds that this is somehow Rafa's fault and just repeat the point from this post's earlier version---something again echoed unanimously by people who have already left their thoughts:

It's time for Roy Hodgson to go.