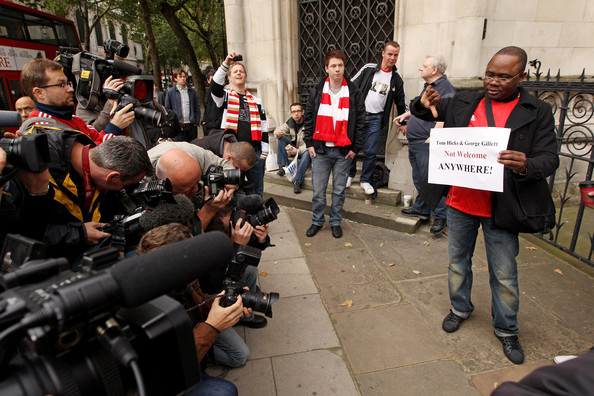 **UPDATED**And the very, very important day has started in the best of ways:

The high court today granted injunctions that could open the way for the prompt sale of Liverpool.

The club's owners, Tom Hicks and George Gillett, asked a judge to delay the hearing of an application by creditors Royal Bank of Scotland for mandatory orders paving the way for a possible sale this week. But the plea was rejected by Mr Justice Christopher Floyd.

At RBS's request, the judge imposed injunctions on the two men requiring them to restore the original constitutions of the companies and managing directors.

This removes the final stumbling block to a £300m takeover by New England Sports Ventures which will see the RBS recoup its original £237m loan to Mr Hicks and Mr Gillett when they bought the club in March 2007.

Martin Broughton continues to say that the board will first need to be reconstituted, but he intends to meet this evening and push forward with the sale to NESV. There's also reports that Tom Hicks has been denied the opportunity to appeal the decision, which would basically allow the sale process to progress unencumbered by his douchebaggery---a most excellent proposition.

Hopefully we're in the middle of a giant step forward for the club, and the days of worrying about whether or not the owners actually have a vested interest in the club's success are over. NESV aren't going to walk into this as saviors, and they'll rightfully have some convincing left to do.

Everyone with a keyboard and the library card their mom got them will be sure to remind you that "now Liverpool don't have any more excuses lolzzz," and they'd be both unoriginal and inaccurate. This hasn't been about excuse-making for what goes on day-to-day on the pitch---I think we all know that hasn't been good enough, and most certainly needs to be better regardless of who's in charge. And for awhile, there wasn't any clarity about how Liverpool was going to move forward---pretty scary stuff.

Unfortunately, I won't be able to sustain any late-night hijinks like last week.

I've managed to make it until about midnight local time, but with proceedings not set to start for another four hours, there's no chance at frequent or timely updates. For right now this post will serve as a placeholder for an update set to come around 7am EST, which is about as early as I can muster. Work day, responsibilities, being a loser, etc. etc.

Feel free to leave your thoughts if you're around for the official announcement of the decision, though, as regardless of the decision there'll be plenty to discuss. We'll try to pick up as quickly as possible depending on whatever sort of news there is to report.

I know I don't need to say it, but I will anyway---a very, very important day for the future of Liverpool Football Club is about to unfold.