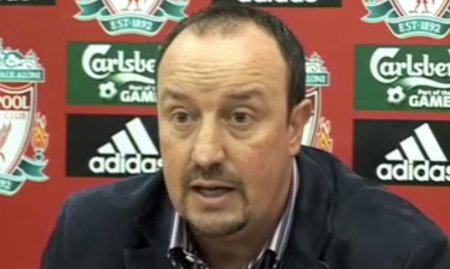 Snow and ice can't keep the man from talking about transfers, injuries, summer plans, and doing the snowman. I'm guessing something got lost in translation.

Once again, the depressingly empty fixture list this weekend leaves me wanting more. Cue Rafa and his endless supply of genericisms!

"If I do not find any good replacements, I will try to keep him. He said that he wants to stay. We will try to train with him in the right way and, if he can give something to us, I will be really pleased. We signed a player with talent, with pace and ability and we want to see the best from him. So we will try to push him and hopefully he can play well. He has the potential and he has shown this a lot of times but we want to see him playing at this level more frequently."

I don't know that the opening statement is a real vote of confidence; that comment doesn't strike me as "you're irreplaceable," but instead, "you're absolutely replaceable, just give it time." Here's to you, Ryan!

Next, on his assessment of the talent available in this month's transfer window:

"At this moment we have to do the best for the club and this means accepting the situation. There aren't too many good players in the market now that you could bring here because the majority of them are with top sides or in the Champions League and they want to stay until the end of the season."

Go ahead and ignore that if you've been transfer listed by your squad...just throw on that Stuart Smalley tape that you usually listen to before bed.

On planning for the summer:

"I have to plan for the summer. When I decided to stay it was because I wanted to stay. I gave my word and I want to fight, so I will fight until the end. Always you have to be ready and you have to know the market."

A bit melodramatic? Talking about five months from now isn't "fighting to the end," it's his job.

And most importantly, news about injuries:

"Riera and Mascherano are training, and that is good. More or less the majority of the team are available."

"Glen is doing well but it's too early. It's a question of one month, maybe a little bit more. He will carry on resting and improving."

The statement also mentions Nabil El Zhar, who's apparently a ways away from fitness with an ankle injury. I don't need to rehash how important I think Riera's return could be for the side, so hopefully he'll be ready to go by next weekend's visit to Stoke. Not pressing much on him being available midweek against Reading, but the earlier the better. No surprises with Masch or Johnson (unfortunately), as we knew the former was going to be short-term and the latter would take more time.

Then today Rafa opened up the yampot again, touching on the transfers the club has made, as well as the weather and his wrestling match with appropriately phrasing snowman construction.

Rafa on Dossena to Napoli...

He wants to play in Italy so it was an opportunity for us and for him. Hopefully he can go to the World Cup. We tried to sign players with an attacking mentality like Andrea and Philipp Degen because to sign wingers is sometimes £20-30million. Offensive full-backs are a little bit cheaper and we wanted to improve going forward with these type of players. Dossena had some good games but couldn't perform at the level we know he can, so it's best for him and best for us.

We needed to do something because these are players we haven't been using much. They are good players who wanted to play every week. We have to manage the squad. If we sell some players maybe we'll have some money available. We have to think about what's best for the club at this moment.

Babel is different. We had an offer from Birmingham and he said he wanted to stay. You always have to listen to offers but the player said yesterday he wants to stay and if he's playing at the level we know he can play I'll be pleased.

We are talking with Atletico Madrid and everything is very close, but it depends now on the player and Atletico Madrid - they have to make an agreement. I cannot talk too much about him because he's not our player but he has experience in international football with Argentina and he can score goals.

The children were happy. They were doing their snowman - we did two or three. The family enjoyed the snow. For the team it was difficult because we needed to cancel one training session. After that it was okay and we were training really well. The mood has been really good. The players are happy and they know things depend on us.

Rafa on the Reading performance...

Rafa on kicking on...

I'm confident we can. Last year we did really well and we can do it again.

That about does it in the way of news today, for now just be thankful these people aren't your friends.