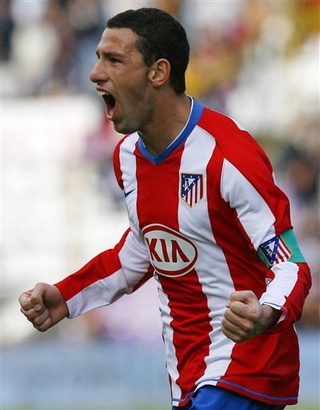 Early news that Liverpool have finished a deal with the Atletico man...

Reported from a few different sources, including the Mirror and Goal.com, that Liverpool have finished off a deal for the Argentinean winger for around £1.5million and 18 months. Okay, so Goal.com's reputation is about as trustworthy as Lindsay Lohan in a room full of cocaine and male/female/mammal genitals, but it's been rumored for long enough now that I'd imagine official confirmation is soon to come. Universal opinion seems to be that this will be a really good signing for the club, as Rodriguez brings a wealth of experience and skill in attack. I've mentioned before that I have little knowledge of the reasoning for his lack of appearances this year, but in the past he appears to have been a vital part of his sides' successes for both club and country. A video compilation, then:

Here's hoping he makes the sort of impact Ian Rush thinks he can.

--This name popped up a few days ago, and resurfaced on the official site, but Bordeaux striker Marouane Chamakh has been linked with a move the Premier League. Apparently Arsenal and Liverpool are battling for his signature. This contradicts the opinion that Rodriguez is the only signing Liverpool will make during the January window, although if the continued speculation about the sale of Ryan Babel to Birmingham catches fire, it might free Rafa up to make another move.

Side note: I love how the official site runs a "Media Watch" column. It's sort of a "look at these idiots" collection during transfer season. I think that makes me an idiot.

--Getting back to the Ryan Babel news, his agent has apparently stated that the club are "thinking seriously" about accepting Birmingham's offer. Not sure what to think about this, if it's even true. Steven brought it up in the comments section the other day, and I'm of a similar mind that it's tough to tell what sort of future impact Babel could have. He's restricted in terms of playing time, but his attitude is apparently shit, and that's the last thing a team fighting for fourth place needs.

--And in the longest-running transfer saga thus far, Andrea Dossena still hasn't made his move to Napoli, although it's seemingly just a matter of time. I wonder it he went the way of Voronin and jet-set during the cold winter, or if he's churning it out in training with the rest of the squad. Sort of glossed over it, but really, what the f*ck was Voronin doing in Miami while the club was playing? Oh nevermind, he was on a special training regimen. Resist the temptation to linger on the right side mid-page and keep scrolling to see the Ukranian wonder further his dribbling mastery. Or just continue to linger on the right side of mid-page.

--Lastly, in the saddest news of the day, renowned twat and anti-Liverpool Rat King lookalike Gary Neville might retire at season's end. Considering he's basically dead weight at this point, my answer to the Telegraph is no.