Share All sharing options for: Random Memorabilia Plug: "This is Anfield" Poster 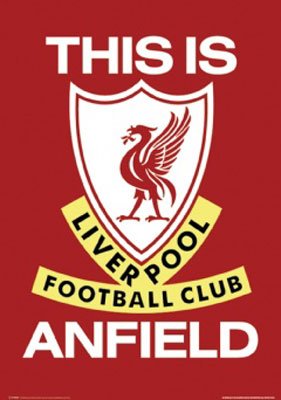 It took all my strength not to post a link to the Liverpool squad frolicking at Melwood like a bunch of snow nymphs. Joey, do you like movies about gladiators? Instead something a bit more random...my buddy received this poster as a Christmas gift, and in between alcohol-induced hiccups, I was breathless as he unrolled it. Actually it was probably just the hiccups that made me breathless, but still, cool poster. Simple, crisp, and nostalgic in a time when things are often overly complicated or downright hideous. Plus it's a great alternative to the poster everyone else in the dorm has of those two chicks kissing in bed or Che Guevara. Good thing you let everyone know you like girl-on-girl action and Argentinean Marxism, your womanizing Friedrich Engels scholar roommate was worried.

This is a replica of the same sign that hangs in the tunnel to the pitch at Anfield, which the players and staff touch on their way out. It's like the Liverpool equivalent of Notre Dame's "Play Like a Champion Today" for those of you more familiar with American collegiate football and movies about overachieving hobbits. Similarly, my buddy informed me that he would be hanging his above the stairwell to the basement, and that he'd tap it on his way down to sing ballads to the framed Fernando Torres portrait he keeps on the nightstand. I know, I know, I thought the same thing. Who has a master bedroom in the basement? Loser.

You can probably buy this thing anywhere, so I'll refrain from plugging any site in particular, unless the Offside has an affiliation/is sponsored by a vendor, in which case, buy it at _______________! They are the best! Great customer service! Preferred seller, would buy again!

It really is worth the have, though, as there's something about it that I do find remarkable. Great addition to the home office or nightstand shrine to Spanish strikers. Your secret's safe with me.