Share All sharing options for: Liverpool 2, Bolton 0: Another Jumping-Off Point? 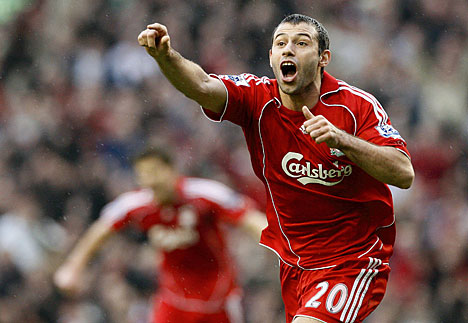 Better. Muuuuch better. Obviously the three points is better than the result midweek at Wolves, but it's also better in terms of the way the squad went about it. Granted, most of my delight comes as a result of how much this display contrasted Tuesday's. It's getting hard to attach much meaning from performance to performance, although from minute 20 on it was a very positive performance, save for a couple minutes at the beginning of the second half. And in the words of Tao Master Masch, “Whether you are winning or losing, it is no good thinking too much about it because you have to look forward and you have to live in the present."

As has been the case lately, it was a choppy, nervy opening that didn't do much for the recent doubts. Bolton had Liverpool on their heels, and the Reds were lucky not to concede after a fine run from Chung Yong Lee in the 24th minute. The South Korean winger began on the right side of midfield, dribbled through the Liverpool defense, and rounded Reina on the left side of the box with a look at goal. Of course, it was Sotirios Kyrgiakos to the rescue, clearing off the line and saving Liverpool from what would have been a disheartening deficit.

Liverpool started to flex some muscle in attack shortly thereafter, with Dirk Kuyt firing over from distance and a chance for Kyrgiakos after a corner. And then in the 37th minute, they took the lead they so desperately needed. Emiliano Insua floated a cross past goal, and Alberto Aquilani did magnificently to nod back across the goal face to Dirk Kuyt, who never makes a mistake when he's got a chance to nick one from a matter of yards. Kuyt's goal was quickly followed by a chance for David Ngog, with the young Frenchman making some space for himself in the box and firing one straight at Jaaskelainen. It was about as good as things could get heading into the half.

Obviously consistency has been a huge issue for Liverpool across games, and even within games it's been difficult. So to see Liverpool end the half on a positive note, and then to largely carry that over into the second, despite a few bobbles in the first few minutes of the half, has to be worth something. A bit unfortunate that it couldn't immediately turn into a goal despite the chance being presented on a silver platter. David Ngog missed an empty net from a few yards out in the 53rd minute after a Steven Gerrard effort was parried by Jaaskelainen, instead only finding the crossbar.

Bolton tested Liverpool off and on, mostly through long balls towards the box, and presented a decent challenge for Skrtel and the Greek. I never got the sense that Liverpool were too threatened, or that an equalizer was inevitable, but the second goal was a welcome one. Emiliano Insua didn't exactly replicate his hit from the Emirates in the Carling Cup, but the shot kicked back off Kevin Davies, leaving Jasskelainen no chance. 2-0 to Liverpool, easing the tension for the last twenty minutes.

As such, Liverpool looked much more relaxed, firing shots at will and stringing together some decent moves. And then, Ryan Babel Sighting!!! Came on in the 84th minute sporting a depression beard, fired off a few lasers, at times looked like a yearling just finding out how his legs work, but he did show some passion in his play. Mostly passion towards getting himself a goal, but isn't that the point? His future at the club is one of the biggest mysteries for me, as I think he could develop into something special but appears to have neither the chances nor the attitude to make it happen.

Reading back through what I've written, I realize I've made no mention of Javier Mascherano, who I think had to be man of the match. He was just dominant today in everything that he did---broke up play, challenged in the air despite his size, streaked forward in attack with surprising skill---and put together a vintage performance. It was similarly impressive stuff from the captain, who looked up for it today and was even able to find himself enough space to fire off a few good efforts on goal. For as underwhelming as he was against Wolves, he was always looking to be a part of the attack and had a spark to his play that we haven't had the pleasure of witnessing in awhile.

I don't think it's any coincidence that the space for Gerrard was in part due to Aquilani, who provided enough in attack that he gave Gerrard some breathing room. And while he was responsible for the assist on the first goal, it looked like Aquilani's still a bit off the pace. It might be that he's trying to create too much, or that he simply hasn't had enough time with his teammates to develop an understanding, but he was not the smoothest today in distribution or possession. But he's unarguably skilled on the ball and gives Liverpool more diversity in central midfield, and if he can create a niche for himself in this side it can't help but be a good thing for Liverpool.

Lastly, there was at least one other result that went Liverpool's way today--Birmingham scratched a draw with Spurs through a Liam Ridgwell 90th minute equalizer. Villa handled Fulham with a bit of ease in a 2-0 win, and tomorrow City start to chip away at their three games in hand. Watching the rest of the table and hoping for help is no way to live, but it's almost a necessity at this point.

As I implied in the title, we've seen plenty of jumping-off points for Liverpool this season, but we've not yet seen anything resembling a jump. Now's as good a time as any, with Everton, Arsenal, and City on the horizon in league, and Unirea waiting in the Europa League. Let's hope that corner really has been turned.