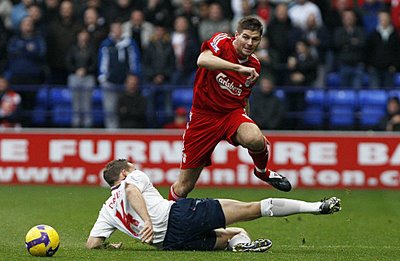 As usual, recapping the news of the past few days and taking a look towards Bolton's visit tomorrow afternoon.

The ongoing discussion between nate at oh you beauty and I has been rearranged a bit---check out the last part for the details, but it seems to have generated some really good reader comments. Appreciate the input and looking forward to continuing the exchange.

So to the papers:

--After signing the youngster to a contract extension, Liverpool have decided to loan Nathan Eccleston to Huddersfield Town. On the one hand it's good for him to see some actual time on the pitch, which will hopefully lead to some maturation and an eventual go at a spot in the regular eleven. On the other hand, I can't help but worry that it's another case of young talent put out to pasture. If there's any season that cries for experiment with the younger talent at the club, it's this one.

--Seems like Eccleston might not be the only young talent to exit during the January window, as there's talk of Vincent Weijl leaving for a spell at a mystery club in Holland. Rinse and repeat from above, although I admittedly know much less about Weijl. Other than I'd appreciate rearranging the consonants and vowels in the last name. In both cases, "gaining first team experience" is ultimately a moot point if they either never return or do return only to flounder in the reserves. I worry about a Kristzian Nemeth-type phenomenon here---player does well in the youth system, gets loaned out, grass is greener where there's playing time, etc. etc. Jumping the gun quite a bit, but still, the utes, they interest me.

--As for those currently in the first team, or at least whenever they're fit, both Steven Gerrard and Daniel Agger feel that Liverpool have been making strides and are headed in the right direction. Which they very well might be, as it's been roundly noted that despite thousands of my synapses exploding after the result at the Molineux, Liverpool had still achieved 11 points in their last 5 matches, unbeaten during that stretch, yada yada yada, I'm really tired this morning. But since I brought up Steven Gerrard, and because I've been a bit harsh on the captain of late, his display against Bolton earlier this season, capped with a sublime volley to win it. More, please:

--Javier Mascherano has slowly but surely worked his way back from being a sure departure in the summer to someone who talks and plays like he gives a shit on a consistent basis. Always a good thing. Granted, he still might leave this summer if the price is right, but he's again issued a rallying cry prior to what's sure to be an important match for the Reds. Also, he's an unwitting Taoist:

"Whether you are winning or losing, it is no good thinking too much about it because you have to look forward and you have to live in the present. The present for us is Bolton and we have to win the game on Saturday."

Who knew that the same man capable of this was also capable of espousing the benefits of mindfulness and living in the present. Pain x Resistance = Suffering, by Javier Mascherano. Actually Thomas Bien, but I'm not sure he knows the importance of a home win on Saturday.

--And as per usual, there's the rumors about Rafa flying the coop, getting flown from the coop, or taking a chicken named Dirk from the coop. The link with Juventus strengthens as the days go by, but it's finally been denied quasi-officially. Which means there's no actual quotes, but club sources "insisted last night that the club had no intention of dismissing Benítez, nor were they aware of indications that the manager was about to resign." Well, if that doesn't kill it dead I don't know what would. I think it's highly unlikely that he's leaving any which way during the season, and it appears that a move to Juventus would be entirely lateral. That is, if the Juventus Offside is anything to go by. And in a completely unsurprising move, Juventus have sacked Ciro Ferrara and appointed Alberto Zaccheroni manager until the end of the season. Who knows at that point.

--God did a bit to embarrass himself last week, and now he's apologized. Not that God, but I am waiting for an apology from him for making Perez Hilton more famous than me. The one that relocated to Australia. He got in a bit of a tussle with Ian Ferguson, the North Queensland manager, and refused to take a spot on the bench during their match against the Brisbane Roar. Sort of vintage Fowler, at least the "mess up and then apologize for it and hope it can be put behind you" bit, but at least he's still got the fire.

--And a plug for Taylor's Red Devils Offside Podcast, where he and his buddies send me into a dissociative state recapping Liverpool's troubles. Tastes like burning.

Owen Coyle's Bolton will be traveling to Anfield full of piss and vinegar, and there's nothing you can do about it! But in all honesty, Coyle does have the Wanderers playing some slightly more inspired football, and their win against Burnley was a big one both emotionally and in the table. Biggest thing now is for Coyle to get back licensing school and retake the test about appropriate touchline dress. He's making Tony Pulis look like Don Draper.

Bolton gave a good account of themselves against Arsenal twice in four days, losing 2-0 and taking a 2-0 lead at the Emirates, only to concede four in a painful loss. They've won two straight though, first against Sheffield United in the FA Cup, then in the aforementioned match with Coyle's old club Burnely. Obviously the visiting fans were was less than impressed with the move, but credit to Coyle for acknowledging it. In response to a question about it, but still.

It's been awhile since Bolton took all three points at Anfield...as in 56 years awhile. Thankfully those days are dead and gone...sort of. But as Coyle mentions in the link above, they'll come fighting for the points, led by Gary Cahill (5 goals in league), Ivan Klasnic (6 goals in league), and Kevin Davies (1 shy of 50 for the club). They've also got creative support through Tamir Cohen and Lee Chung Yong, and they gave Liverpool plenty of trouble from set pieces at the Reebok.

For Liverpool, I can't see a whole lot changing. Agger's likely to be a late decision, but even if he does make the squad I doubt he'll displace Kyrgiakos or Skrtel, who have started to form a decent partnership in central defense. And while Rafa's been scouring the transfer market for some cover at right back, it'll surely be Jamie Carragher in the role. The transfer window closes in what, three days? Good time for Rafa to pronounce, "we will not rush." On the other side, I again call for Aurelio to give Insua a spell, but Rafa's continued to show loyalty to the Argentine through a tough run of form, and Aurelio's fitness is most certainly cyclothymic.

It's no secret that I'd like to see Aquilani back in the starting eleven, in the place of Lucas but the role of Gerrard. I see no harm in experimenting a bit, and if Gerrard drops back into a deeper-lying role he'd have a bit more of a chance to dictate the build-up. It plays to Aquilani's strengths as well as Gerrard's, as in a more advanced role his distribution is a bit stifled. Again hoping for Maxi and Riera on the wings, and it'll probably be Kuyt up front. My only wish there is that he stays up front, as it was clear against Wolves that operating without a striker is not a great plan if you're trying to score goals.

It's a 10:00am EST kickoff in the US, I'll be posting stream links and team sheets prior to the match whenever they're released. Just win, baby.

For now, take yourself to a happier place: