Share All sharing options for: Liverpool 0, Wolves 0: Just the Tonic for Optimism 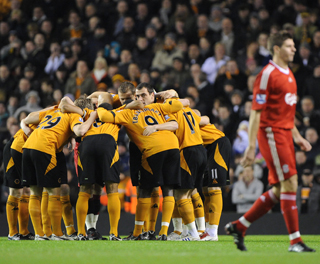 Really not much to say right now about this abortion of a match, other than that it contradicts everything Liverpool did well against Stoke and Spurs. Horrific in the passing game, no semblance of cohesion between anyone, impotence in attack. Rafa's team selection got exactly what it was looking for--hoofing balls forward when in possession and hoping someone gets on the end, scrambling to defend because of a stretched back line, and a midfield that passed towards their own goal just as often as it did the opposition's. Not exactly a recipe for success.

And maybe even more inexplicably, only one change was made the entire match, and it subtracted one of Liverpool's most creative players. David Ngog looked threatening at times after coming on for Albert Riera, but Liverpool were completely lacking in any sort of shape in attack. There were multiple times that saw the team operating literally without a striker--Ngog or Kuyt on the wing, with the other nearby. It was an aimless frenzy at the end of the match, and as we've seen far too often, Liverpool couldn't piece anything together.

I can understand, maybe, the decision to sit Aquilani. For a spell. But leaving him on the bench for the entire match is questionable at best, particularly when Liverpool were getting absolutely nothing done in the middle part of the pitch. Sure, he's probably best "in the hole" or in the "Gerrard role," but he couldn't have done any worse than what we saw on the attacking end. Hell, I'd have been in favor of bringing on Phillipp Degen late in the match, maybe even Ryan Babel. Blasphemy, I know, but it would have been something to break up the creative black hole that Liverpool have managed to form.

So what are the positives?

That's a stretch, considering Spurs beat Fulham 2-0, and Villa and City both have two games in hand. Mostly, I guess it's that Aquilani didn't get hurt worse. Gerrard didn't come off injured, neither did anyone else? The pitch wasn't swallowed whole by the swirling vortex that took the place of Liverpool's ability to attack?

Back later tonight or tomorrow with some forced objectivity, but for now, I'm comfortable in my pessimism. It lets me know I care.