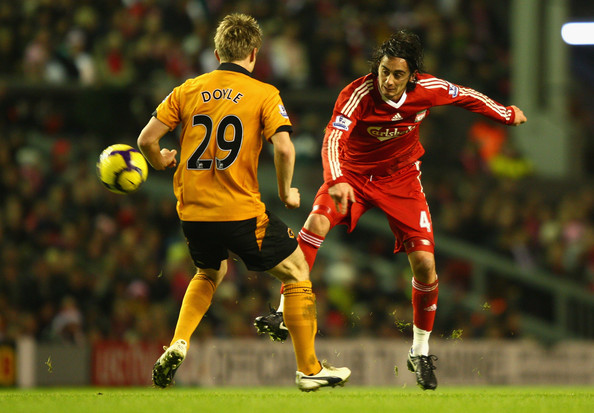 Time to commence world smashing. Which he'll have to do from the bench.

Well color me and my banner pic embarrassed. No Aquilani in the starting XI, but we do get our first glimpse of Maxi in a starting role. Theoretically this is the lineup that provides the most width, and we'll see how long Maxi lasts. After his best display last week, I am surprised that there's no room for Alberto, and you have to imagine that Gerrard's quick return pushed him out. For me, he's still preferred over Lucas. No shake-up in the back line, and Fabio Aurelio still misses out, along with Daniel Agger. It'll be interesting to see how this one plays out--Liverpool's got a good mix of grit and skill, and they'll need every bit of it to get the three points.

--Mick McCarthy has some flattering words for Rafa, but assures that his tactics will be a mystery cloaked in a veil under the cover of darkness. That hasn't stopped the irrepressible spirit of DJ over at Wolves Offside, who seems to think that McCarthy will be ringing in the changes against a Liverpool side that's "looked vulnerable all season." Where does he get off...oh, actually that's pretty accurate. But it's a new season!

--Couple pieces of Rafa news, as no day would be complete without fortune telling and fear mongering. First, one of the circling vultures has been identified as Juventus, a club dealing with some serious shit of their own. Don't take my word for it. Second, Rafa has no doubts that Steven Gerrard will be fully fit come World Cup time, and laughs off rumors of injections. Nice dig in there from Benitez, who reminds us that Gerrard has had to play less than fully fit at times--"That has occasionally happened with Steven when he has returned from international duty." No hard feelings, Fabio.

--Alberto Aquilani, of walking on water/being a flop/resurrecting fame, has the backing of Ian Rush. I'm probably alone in this, but I just don't think it carries much weight without the mustache. Tom Selleck would be ashamed. But Rushie still makes some good points, particularly about the crushing he took while laying off Kuyt's opener against Spurs. Glad to see he could celebrate in style, writhing on the ground after getting smoked by Michael Dawson.

--Looks like Damien Plessis' mystery suitor from Serie A is Lazio. Like I mentioned yesterday, there's currently little room for the development of the once (and likely still) promising defensive midfielder. It really was strange, you saw him late in the 2007-2008 season, then again early in 2008-2009, but then--POOF! Sadly, not a case of Bluth family magic, rather the emergence of Lucas as the heir apparent in central midfield that really did in the French youngster. Hopefully he finds time and stays healthy wherever he ends up.