Share All sharing options for: Making Sense of Rafa Benitez, Part I. 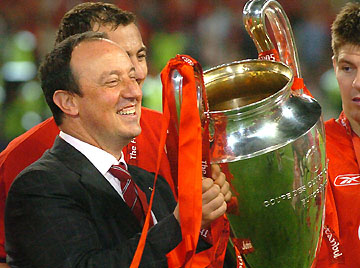 Hit the jump for the first part of the exchange between nate and I about Rafa Benitez.

I. Record as a Manager
Intro

**emails were written prior to the win against Spurs...doesn't really change much of anything in the discussion, though, just some references might seem off**

Ed: Seems like sort of a benign way to start this discussion considering everything that's gone on this season, but hopefully it'll be a gentle introduction. The tough result against Stoke makes this discussion that much more apropos, as it kicked up another dustcloud of uncertainty for Rafa's future. For me, a better effort and performance, but still a painful result. The points lost could be crucial, but I'll take that type of display over something like Wednesday's (loss against Reading) for the rest of the season.

But it's clear that a draw is not enough, despite the better showing and effort. For some clubs, this would be a good result--draw with a stingy, defensive side away from home...and maybe for the current Liverpool it is. But one of the things that makes evaluating Rafa so difficult is that fact that he's at Liverpool. Might sound stupid, but the expectations are pretty clear every year--win. Everything. Granted, the Premier League has taken precedence in the hearts and minds of supporters after such a long barren spell, but the club and its supporters want it all. Tough year to want it all, eh?

As of writing, Liverpool are in 7th place on 34 points, and they can do a lot for themselves tomorrow evening against Spurs. Obviously far off the pace of last season, but not yet numerically doomed. I know you've done the numbers and infographics in the past, so I'll leave the heavy duty stuff to you and just introduce the superficial stuff. Here's an overview of Rafa's time with Liverpool (from a number of sources...not 100% sure of the accuracy):

The silverware for the club:

Add into the mix a string of appearances in the quarterfinals of the Champions League, a 2-1 defeat against AC Milan in the 2007 final, and a near-record number of points in league for the 2008-2009 Premier League season. Plus, all of this is ignoring the 2 titles he won in Spain with Valencia, as well as the UEFA Cup he won there. Makes for a pretty damn impressive CV.

I guess I have two questions, then. First, what do you make of his record with the club? Second, given the expectations, does any of this even matter if he doesn't win the League?

nate: Up until this season, there was little to quibble with in Benitez’s resume. I think it’s fairly clear he’s overachieved at the club, even including this abortion of a season. You’ve listed the trophy wins and relevant CV statistics, but more importantly, Liverpool has improved almost every year under Benitez. Second place – 86 points – looked like a perfect launching pad for this campaign, even with the loss of Xabi Alonso. And yet, here we are.

Winning the Champions League was the best and worst thing that’s happened to Benitez. Admittedly, it probably kept Gerrard at the club and gave Benitez one hell of a trump card, but it was also a case of too much, too soon. If Rafa already won in Europe with a majority of Houllier players, he was bound to rule the world once he got his players in Liverpool kits, right?But it doesn’t work that way. Another trophy, the FA Cup a year later, was the last piece of silverware Liverpool’s won under Benitez, and it was three and a half years ago. And yet, yes, I still do think he’s overachieved.

First, you have to look at the competition. For the entirety of Benitez’s tenure, both Chelsea and United have spent more money and had stronger squads. Along with Arsenal, they have bigger stadia and take in far more revenue. It’s little surprise both teams have usually finished above Liverpool. Second, and relatedly, there are the oft-mentioned financial restraints. What if Liverpool had been able to afford the big name players mooted? Alves, Simao, Barry instead of Arbeloa, Pennant, Aquilani, among many others. What if the owners weren’t complete shysters?

If everything were on an equal footing, Liverpool probably would have won the league already. Had two results gone their way last season – or had two of United’s results gone their way – Liverpool would have already won the league. Narrow margins like that, considering the disadvantages Liverpool and Benitez begin with, are what’s bought Rafa so much time with me, as long as there’s progress.

To answer your second question, yeah, expectations thoroughly matter. And Benitez is expected to win the league, no matter the injuries, squad depth, lack of funds, etc. It’s been two decades since Anfield’s heard ‘ee-aye-addio, we’ve won the league,’ and that’s completely unacceptable. That’s the cost of being Liverpool’s manager. And that’s why even sycophants like me have questioned Rafa this season. Obviously, expectations were too high, but this is still a good team that should be better than current form and league placement suggest. And because Benitez hasn’t gotten the best out of the team, his position’s rightfully come into question.

Now, I obviously still believe Benitez can turn things around, although this season’s become a lost cause. And even if you don’t, you should still want Rafa to stay for the rest of the campaign. Liverpool doesn’t fire managers mid-season, and I deeply fear the torment a change could cause. Long story short, I guess we have to wait until the end of the season to fully answer this question. Yes, Liverpool’s obviously not winning the league this season, but the final place matters, as does the team’s reaction for the rest of the year.

I still think Benitez can win the league with Liverpool. But he may not get the chance to if things don’t change enough come May. He doesn’t have to win the league this season – it’s just not happening – but, as said at the start of this rambling defense, we still have to see some improvement. If Liverpool continues to regress, Benitez’s position will become untenable. It’s the business we’re in.

E: The issue of winning the Champions League in the first season is something I've struggled with too, especially when people bring up the "he had to bring in his own players" argument. If he won trophies with somebody else's squad, was Houllier that bad? Probably, but still, I agree that in retrospect it almost seems like too much too soon. I think the league campaigns were probably a more accurate reflection of what Rafa was bringing to Liverpool...just hoping this season is an anomaly.

As another aside, since you brought up Houllier, I was listening to the EPL Talk Podcast yesterday, they discussed his reputation after leaving Liverpool. He mentioned that Houllier still maintained a fine reputation on the continent despite being a "failure" at Liverpool. So if Rafa does end up leaving, what's his reputation? Is it based on the aforementioned numbers? His eccentricities? Goatee?

n: Houllier’s reputation on the continent lasted – at least in France – because he had a huge hand in grooming that country’s golden generation. That doesn’t go away overnight. But, whether by choice or not, he’s only been manager of one other club – Lyon from 2005-2007 – since leaving Liverpool. I’m fairly certain Benitez would have far more opportunities whether he resigned or was fired. His reputation will assuredly be intact in Europe, especially Spain.

But if Rafa leaves this season, or before Liverpool wins the Premiership, he’ll be remembered in England for the 2005 Champions League. And that’s about it. I hate the thought of it, but most would focus on the failure to reclaim the league, which is understandable with the club’s pedigree. Gerrard will be given credit for the 2006 FA Cup, and people will probably remember Rafa bringing the legend that is Fernando Torres to Liverpool, but Istanbul will be the dominant memory by a mile. Whether or not that’s fair is another question.

Winning the Champions League was a perfect storm of Liverpool's fighting spirit, Benitez’s tactics, and that intangible luck I so frequently reference. And Istanbul was the epitome of that. Liverpool went 0-3 down, partly because of the questionable decision to start Kewell and partly just being overrun by a very good Milan side. But Benitez made the right decision at halftime in bringing on Hamann and Liverpool fought back and held on, with substantial credit going to the fans that never lost heart. Gerrard was talismanic and Carragher made tackle after tackle, but Traore also cleared off the line, Smicer scored the crucial second, and Dudek made that miraculous double save. Who would have guessed crucial roles for those three? And what have they done since?

That trophy does and doesn’t make Benitez a great manager. What makes Benitez a great manager is the rest of the CV – a similar legacy with Valencia, another CL final appearance in 2007, a few more trophies, and a decent record in England. One could argue that Benitez’s tactics aren’t perfectly suited to winning the Premiership, and it’s probably a fair accusation, especially in his first couple of seasons. And that’s probably a good segue in Part II.