Share All sharing options for: Making Sense of Rafa Benitez 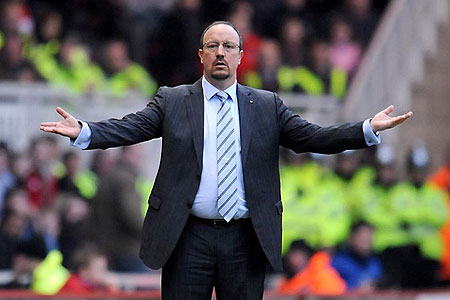 nate from oh you beauty and I exchange emails about Rafa Benitez in an attempt to come to some sort of conclusion about his time at Liverpool.

The ongoing soap opera of Liverpool F.C. has obviously been back-and-forth over the last few weeks and months. No less than ten different columns a day are devoted to the managerial post at Liverpool, and most of it focuses on the current inhabitant, Rafa Benitez, and some on potential future inhabitants. The recent results for the club have seemed to only polarize opinions further, with those who back him through thick and thin only strengthening their support, and those calling for his head only getting louder. The win against Spurs has quieted things for a bit, but it'll only take one more bad result before things kick back up. Both sides focus on some common factors--management of his players, dealings in the transfer market, record as a manager, and the like.

As someone who admittedly waffles in his opinions about Rafa, I thought it would be useful to try to take a step back and see where the evidence lies. Not exactly the peak of creativity (especially lately), but one that I felt was worth exploring. I figured a task like this is one better done with company, so I floated an email to nate to see if he wanted to be involved. If you haven't found your way over to oh you beauty, do so immediately, as nate has managed to maintain some of the highest quality stuff about Liverpool on the internet for three and a half years now.

I mentioned to nate that I'd like this to be a Simmons/Gladwellian email exchange evaluating Rafa's time with the club, and fortunately for me he agreed. We decided to focus on a few specific areas in the exchanges, but also allowed for some tangential discussion about other issues related to the club. Our six main focal points:

I. Record as a Manager
II. Tactics
III. In the Transfer Market
IV. Man Management
V. Handling the Press
VI. Plans for the Future

So that's the framework, which will unfold over multiple posts depending on length, and they'll likely be a bit extensive. We'll just run them on both sites when we feel that they're completed enough, or if I've been drinking and hit "Publish" instead of "Save." Before we get going, I asked nate to provide a brief bio about himself, his history as a Liverpool fan, and how he got going on oh you beauty. I also provide a bit on myself, since I may be new to some of nate's readers and never really introduced myself on here.

nate: Ed gives me far too much credit. For those that don't know, I'm nate (yes, I'm one of those odd people who don't see the point in capitalizing names, a habit I've kept up since those august angsty teen days), and I write oh you beauty. I'm probably best known as a Benitez, Kuyt, and Lucas apologist, which isn't easy going these days. I swear, following Liverpool is probably the only part of my life where I'm an optimist, and it's become almost impossible this season.

I'm just a fan on the wrong side of the ocean who started writing out of love of the team, sport, and, well, writing. I'm a nerd, and my deep and dirty secret is I became a Liverpool fan at the age of 15 because of that Judas traitor Michael Owen. An Anglophile as long as I've known the meaning of the word, soccer was one of two sports I've played my entire life, and I've followed the English national team since Italia '90, a sadly formative moment in my childhood. When Owen, not much older than me, burst onto the international stage at the same time I was becoming intimately familiar with the internet (and could afford to purchase videos and DVDs from abroad), I starting following Liverpool. It may not have been the team's halcyon days, but I didn't know it at the time. Increasing stateside soccer coverage made the support turn into an obsession, and the more I followed the team, the less I cared about individual players like Owen (even though the second thing I did upon landing in England when I studied abroad was buy an Owen jersey, which I still have). Thankfully, the obsession became something positive when I began the blog in September 2006, basically because I needed a distraction from a boring job and a bad relationship.

But enough about me. You're here for the football.

Ed: And to learn more about me, clearly. You've seen me on the Liverpool Offside for the last half of last season (starting here), and starting up again in September (here).

My interest in football started unofficially as a six year-old, when I led my U6 team in goals and yellow cards. I played off and on for years after that, then was sufficiently Americanized and played baseball through high school and college. I picked up proper football again through the FIFA series on in the later part of the '90s and early '00s, followed the 2002 World Cup regularly, and really caught fire in 2006. I admittedly knew little of Liverpool, or club football for that matter, but I'd seen highlights of the FA Cup Final prior to the World Cup in Germany and marveled at the passion. I caught damn near every match of the World Cup that summer, researched Liverpool exhaustively, and hit the ground running with the club in August of that year. Steven Gerrard, Robbie Fowler, and Ian Rush highlight videos were my gateway, but similarly to nate, following the team consistently pushed me past the individuals and into the club.

With introductions settled, we're going to launch into the exchanges. If you have any questions, comments, or feedback, please feel free to comment at one of our sites. This will be an ongoing thing, so there's room for us to revisit certain questions or comments. On the horizon, I. Record as a Manager