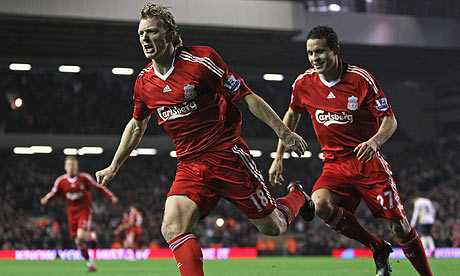 Some day-after thoughts on the hard-earned 2-0 win.

In no particular order, but starting from the beginning:

--Given the number of injuries, the squad selection was going to be an adventure, and I mentioned yesterday that I still managed to be a little disappointed. Mainly I had hoped that we would see Maxi start wide right and start to get familiar with the squad, but with Rafa it was always going to be a stretch. Kuyt up top was particularly worrisome for me--we'd seen Ngog get dominated for half the match against Reading and most of the match against Stoke, and I wasn't optimistic about his chances. Shows what I know. It was a welcome return for Albert Riera, and also a boost to see Aquilani given a more advanced role.

--You could tell early on that Rafa's calls for fan support were answered. It was a big-match environment from the outset, and a stark contrast to a few matches earlier this season at Anfield. I wouldn't say it's been missing all season, but you got the feeling that yesterday's match was the first one in awhile that reminded what the club and its fans are capable of.

--Kuyt's opener wasn't completely out of nothing, but it was a bit of a surprise. He and Aquilani combined nicely, with Kuyt chesting down to the Italian, who laid it off either as the result of getting crunched by a tackle or simply superb timing. Great finish from Kuyt, who must have caught Gomes off guard with the curling effort. In a game like this, if you get a Dirk Kuyt goal you expect it to have bounced off four defenders, straight to him alone in front of goal. Not so yesterday, and a great start to the match.

--Much better partnership yesterday between Skrtel and Kyrgiakos, which was really the result of a better performance by Skrtel. He, like his Greek counterpart, was much more confident and was good in the air. Especially when dealing with the chippy Jermain Defoe, whose typical move of the day was to dig in and back up. Skrtel gave no ground and looked to be returning to good form.

--On the topic of the Greek, he's been a fantastic presence for Liverpool this last week. His physical play is obviously welcomed, but he plays with an intensity and passion that I think Liverpool could use more of. Same goes for Degen--not as physical, but tireless on the wing and relentlessly energetic. While I think it would be unfair to say Liverpool were playing passionless football for the whole of this season, I think it is a fair assessment that the side has played some stoic, uninspired football at times. Degen and Kyrgiakos, along with Carragher, Skrtel, and Kuyt, combined to define this match with toughness and effort instead of an overly controlled, static style that we've seen far too often.

--It was great to see Alberto Aquilani in a role that seemed better suited to him. He was far from perfect and gave the ball away more often that Rafa will have liked, but he was a direct contributor to the first goal and looked like he was starting to free it up a bit. It had to have been his best performance in a Liverpool shirt. It'll be interesting to see what Rafa does when (or if) the squad is back at full fitness, as Aquilani looked much better when he was *the* presence in the central part of the pitch--Kuyt, for the most part, stayed up top, and Degen and Riera were wide almost exclusively.

--As I mentioned earlier, the return of Albert Riera was a welcomed one, although he didn't have a ton of action on the wing. His biggest threats came from set pieces, which I commented on a few times yesterday. I don't remember him delivering such sharp balls from corners or free kicks, but maybe that's because he hasn't done it that often in the past. He showed a wealth of intelligence and creativity in possession, and I'm hoping that he'll continue to feature on the left. I think he can have a really positive impact so long as he stays fit.

--It felt like an eternity for the match to get to the 85th minute, but when it did I suddenly didn't want the match to end. In a vast departure from most of their performances this year (particularly in Europe), Liverpool were dominant in the final minutes. A handful of chances were rightfully capped off with Kuyt's penalty, in which the Dutchman sent Gomes the wrong way twice--he was forced to retake after Lucas got a little over-eager on the first. I had forgotten how nice it was to have a match completely sealed in the dying minutes.

--Maybe not completely shocking, but I think the squad is performing better without Fernando Torres and Steven Gerrard. Sure, they're the two best players on the squad in terms of technical ability and reputation, but both have cut frustrated figures throughout the season. It's likely down to inconsistent appearances due to injury, but both have seen their influence markedly diminish. I think this has had a bigger impact on the team's psyche than I may have realized--sort of a "if they can't do it, what chance do we have" mindset. This Liverpool side, and the one that took the pitch at the Britannia, were much more aggressive and proactive, and that's what they need to see the season out.

--Finally, in the next day or so I'll be putting up an introduction for an email exchange that nate from oh you beauty and I have been having about Rafa Benitez. As I'll mention in the intro, please feel free to leave comments or thoughts on the topic. nate and I will be exchanging emails for awhile on the topic, and your input will be much appreciated.