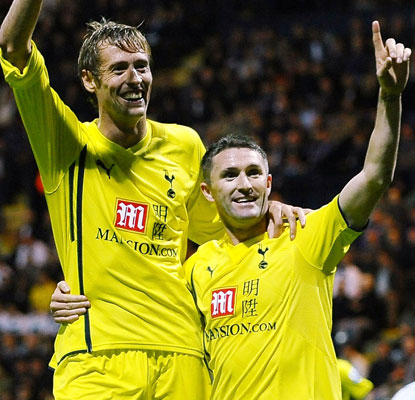 "That's where I sat during matches too, Robbie, havin' me nachos."

Liverpool defeat Spurs 2-0 at Anfield; back later tonight with more.

Not overly impressed with Rafa's team selection. Granted, his creativity is somewhat limited, but we again see a side that is primarily of the defensive mindset. It's good to see Riera back in the starting eleven, and hopefully he'll add some width to the attack. I'm worried about Kuyt up front--similarly to Ngog, he can get swallowed up due to lack of pace, technique, etc. Fabio Aurelio has gone missing, but it can't be down to form, because I thought he was runner-up to Kyrgiakos against Stoke as MOTM. And call me stupid, but I'm happy to see Degen out there again. Willing to press forward and gives it his all. No comment on the Greek needed--we all know what he's capable of. Virgins, beware.

Worth watching Kranjcar against Carra today. Apparently Tom Huddlestone misses out due to injury, and Robbie Keane, in a familiar role, starts a game at Anfield on the bench. Wah wah.

Well color me surprised, this one is touted as a must-win. Which is probably one of the more overused phrases in the 2009-2010 campaign, along with the beginnings of many new seasons. And it's stating the obvious, but there is indeed a massive difference between one point and seven--six points to be exact. This side is going to have to scratch and claw their way to the three points, but they're absolutely capable. Let's hope the side Rafa has picked can do just that.

The early papers also have Harry Redknapp's thoughts on the match, and he rightly pronounces that a win at Anfield would not only boost them in the table, but would do wonders for their reputation. Of the three teams outside the traditional big four currently threatening the old guard, Tottenham might be the one that others (including myself) view as the most susceptible to a collapse. Call it women's intuition (that I've borrowed from my wife), call it simply looking at history, I just don't think they have it in them to sustain a bid for a Champions League spot. I know, I know, those words carry a lot of weight coming from a supporter of the 7th place club that lost to Portsmouth. But Fratton Park is tough, right?

The rumors about Guus Hiddink won't die away, and now his agent has "spoken to Liverpool." Careful readers will note that "speaking" to Liverpool, or the eight other teams mentioned in the article, did not actually constitute holding talks. Which either means that Hiddink is in line to take over the club tomorrow, or his agent was just doing more autograph hunting. "Hi, it's Cees again, tell Fernando to send back that manzierre addressed, 'To Cees, XOXO Nando.'" Not creepy.

Steven Gerrard finally weighs in on his gladiator duel with Rafa, writing it off as "daft." I guess we'll never know what really goes on in the locker room, but I'm pretty sure that Rafa and Gerrard aren't sharing a fine glass of Jameson after training sessions and having a chuckle at the daily papers. Nice assurance from the skipper, though, and hopefully he comes back ready to go. I mentioned before that he's been underwhelming for most of the season--it might be mostly due to fitness, but he's also cut a disappointed figure for most of his time on the pitch. As a leader, I expect much more from him. Granted, he doesn't have the most outspoken personality, but that might be what this side needs.

Here's something worthwhile--George Gillett gives Rafa his complete backing. I bet it's completely reassuring to have someone who knows nothing about football place you in his top 5 list. Or, an absolute write-off.

Something I mentioned yesterday that continues to find its way to the papers is the link with Standard Liege striker Milan Jovanovic. We'll find out today how desperate Liverpool are to get some cover for Fernando Torres--if David Ngog continues to perform as he has the past two weeks, I'm in favor of bringing in whoever they can get their hands on. But maybe Rafa can just listen to Ryan Babel's Twitter more.