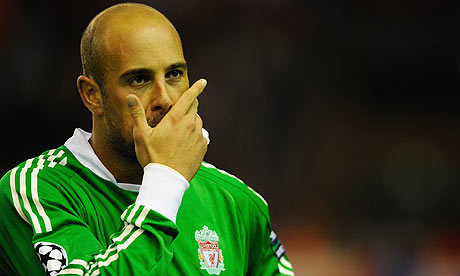 Two points lost for Liverpool, and inevitably more talk to come about the future of the club. Sigh.

Looking at the team sheet prior to kick-off, you knew it was never going to be a free-flowing, beautiful game of football. Nine defensive players, ten if you count the tendencies of Dirk Kuyt, and Stoke City, who aren't exactly the Arsenal of Northern England. Then again, neither are this Liverpool side.

The first half played out about how you would expect--both sides creating a couple chances out of miscues or set pieces, but nothing to write home about. Individually and collectively, Liverpool seemed nervy and out of sorts. Maybe the worst offender, especially early on, was Martin Skrtel, who almost gave away goal-scoring opportunities on three consecutive touches in a two minute span. He survived, though, mostly in part to the cover given by Sotirios Kyrgiakos, making his first appearance for the club since November.

The biggest talking point of the first half came in the 26th minute, when Lucas was tackled by Danny Higginbotham in the box. Lee Mason denied the penalty shouts and booked the Brazilian, apparently for making a meal of the tackle. I don't know that it was a stone-cold penalty, but I'm not sure it was a bookable offense on the part of Lucas. He seemed to be headed towards ground prior to contact, and I guess if you're blowing the whistle and it's not a penalty, there's got to be a booking.

The second half started with more of the same, with maybe a bit more intent from Liverpool. Finally, in the 56th minute, a streaking Phillipp Degen was clattered into by Higginbotham, resulting in a free kick for Liverpool on the right edge of the area. And as has so often been the case, Fabio Aurelio provided a bit of magic for Liverpool. His free kick sliced in towards Thomas Sorensen, who could only parry after being partially blocked by one of his own defenders. In a move only fitting for the first 57 minutes of the match, Sotirios Kyrgiakos was on hand to bundle it home and give Liverpool a 1-0 lead. Poor and nervy defending on a set piece from a side other than Liverpool? Give it time.

Much of Stoke's threat in the first half was neutralized by injuries to Rory Delap and Abdoulaye Faye, so it was no surprise they struggled to find themselves in attack for an extended spell. Even after conceding, it took them awhile to to press Liverpool, but once they started they were relentless, and they wouldn't stop until they found an equalizer. Starting around the 75th minute, and keyed on by the introduction of Ricardo Fuller, they really started to stretch Liverpool. And unfortunately, they'd get their equalizer in the dying minutes of normal time. Higginbotham's header from a 90th minute corner back across goal found its way to an unmarked Robert Huth, who poked home past Pepe Reina. The Liverpool players shouted for offside, but Insua clearly played him on. Unfair to Reina, who had been so positive for the Reds all match.

Couple notes outside the action from the match:

Maxi Rodriguez made his Liverpool and Premier League debut in the 78th minute, coming on for Phillipp Degen on the right wing. I'd be remiss if I didn't mention the quality of the shift that Degen put in. Maybe more a natural winger than defender, he was tireless in getting forward and was responsible for winning the free kick that led to Kyrgiakos' goal. I most appreciated the fact that he kept his head down and continually pushed forward, almost devoid of pomp or petulance, something I think the club desperately need. Two good performances in two matches now from the Swiss defender, after not seeing the pitch since early December.

But back to Rodriguez, who showed flashes of the technical skill and comfort on the ball in tight spots that Rafa mentioned when he was signed. Unfortunately he came on at a time in the game when Stoke were really starting to press forward, which likely limited any major attacking influence he could have had. His presence was enough at times, and he was a quality option off the bench in a season in which Liverpool have lacked just that. Slightly lacking in pace, though, as he was unable to get past his man on a couple occasions in the final minutes. Tough to tell, but hopefully Wednesday will give us an extended look.

David Ngog was, unforunately, anonymous again. He didn't look completely overmatched, but that's mostly due to the fact that he went missing for most of his time on the pitch. That's two matches running that he's been a black hole up front, and he's going to have to return to whatever form he was gaining if Rafa's going to continue to pick him. Aquilani, another one who struggled against Reading, looked decent after he came on, but didn't have a wealth of time. It was going to be a big ask for him to start after playing the full 120 on Wednesday, so not a big surprise that he was on the pitch from the outset.

For me the man of the match has to be Sotirios Kyrgiakos, followed closely by Fabio Aurelio. Obviously he scored the goal, but the shift he put in defensively was immense. He was a beast all match in the air, with numerous clearing headers and plenty of critical challenges. Particularly in the first half, when Martin Skrtel was a bit jittery, Kyrgiakos was a stable, strong presence. Perfect for this type of match in theory, he matched that with his performance. Aurelio performed admirably on the left wing, and while he's lacking in pace, his threat from set pieces and creativity were desperately needed.

There's disappointment after performances like Reading, and then there's matches like today, when the side clearly bust their ass and still can't come away with all three points. Today's disappointment is vastly different from Wednesday, but it's disappointment nonetheless. Little time to dwell on the lost points, though, with Spurs coming to Anfield on Wednesday. It's not looking like the fitness of the squad will be changing much, so once again it'll come down to desire and effort.

Stupid quote of the day: "Liverpool now conceded 13 of 26 goals on set pieces. That means they were 12 of 25 coming in." --Tommy Smyth, graduate of the Tim McCarver school of stating the obvious.