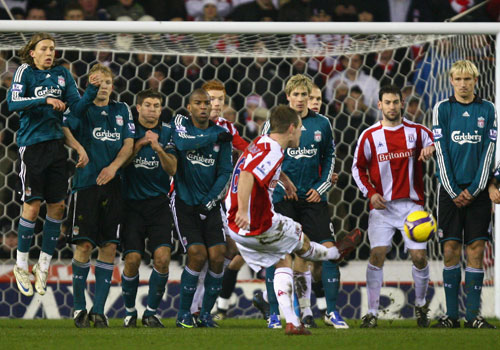 Two of the above six feature today. Team sheets are out, and I am...certainly surprised.

And for those of you with cable in the States, reminder that coverage starts at 7:30 EST on ESPN2(HD).

I won't lie, I was pretty sure Sotirios Kyrgiakos was either deported or dead, but his physicality is a welcome addition against a side like Stoke. Compounding Liverpool's worries, however, is that Daniel Agger completely misses out on the trip, and John Bradley just mentioned on the pre-game broadcast that he'll likely miss Wednesday's match with Spurs. Not an overstatement to say that this is an extremely defensive side--the midfield is entirely composed of defensive midfielders or defenders, with Degen and Aurelio operating on the flanks, and Lucas and Mascherano partnering in central midfield. Kuyt is said to be in the "Gerrard role," but I don't see him doing much other than joining Ngog up front. Quite literally, two attack-minded players on the pitch.

Also not a lie to say that I have absolutely no idea how this will go today. Bradley has said the word "experimental" at least seven times in the last five minutes, so I suppose this is...an experiment. No surprise that Maxi starts on the bench, along with Alberto Aquilani and Albert Riera. The rest of the bench is composed of younger talent--Dani Pacheco, Stephen Darby, and Jay Spearing--and Diego Cavalieri. It would be nice to see both Maxi and Riera come on at some point, but it all depends on how the "experiment" goes. To be fair, Phillipp Degen might actually be a better winger than defender, as everything we've seen of him this season has been forward movement. Not necessarily the best thing for a defender, but maybe that makes it three attackers in the side.

There was talk that gained steam around the end of last week that David James was headed to Stoke, and yesterday the move was in shambles due to a dispute between who would be paying the keeper's £65,000 a week wages. I don't know that the move was ever advanced enough for him to have faced Liverpool today, so not the biggest of stories for either side. Plus, Thomas Sorensen is no slouch.

Yesterday I mentioned that Ryan Babel didn't make the squad, what I didn't mention was that he announced it on his Twitter account. Along with 6 or 7 other twatters that don't reflect real well on the young man. Consider this me taking back all those things about him just needing another chance and believing in him. I can't trust people who twat that much.

His corpse isn't even cold yet, and still there's been no less than three different men linked with Rafa's job. First, and maybe the most popular, was Guus Hiddink, sometime Russian national team boss and last year's Chelsea flavor of the month. Next came Jose Mourinho, current Inter boss and general stud, who has already listed his demands. Most recently it's been Fulham gaffer Roy Hodgson. Speculation is just that, but if we're talking seriously about replacing Rafa Benitez, not a bad list of candidates. Long way to go between here and there, however, and for what it's worth, Tony Pulis is backing Rafa. And, wouldn't you know it, so is Rafa.