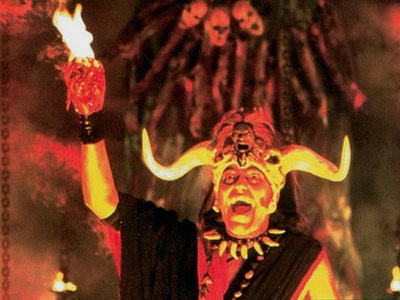 It's a tea-time kickoff at the Britannia Stadium on Saturday afternoon, making it an early one for fans stateside. Good news is that it's the ESPN2 HD game for those in the US, bad news is...everything else. Where have you been the last week? Before I get to Stoke, how about a quick rundown of the major contributors to a smashing week for LFC?

Known for: Responding to a fan email by calling the supporter an "idiot," kindly requesting that said supporter would "blow me, f*ck face."

Impact: Sort of none, really. Everyone hates George Gillett, Tom Hicks, Sr., Tom Hicks, Jr., and generally those born outside of Merseyside. So this really just confirmed their dislike, but it took centerstage when Spirit of Shankly called for his resignation from their ivory tower, or their ebony tower. They found their Victorian sensibilities insulted and demanded justice. And, as justice is blind and apparently has no memory, they got it. Tom Hicks, Jr. left his role as director, tail firmly between legs, off to spend the money his dad doesn't have somewhere else.

Impact: Mildly to moderately negative. Not exactly romancing the Anfield faithful prior to the FA Cup match AT ANFIELD. Admittedly it makes a large amount of fiscal sense, but supporter's groups were outraged at the thought of watching Liverpool at "Budweiser Stadium." Some supporter that guy is, he doesn't even know that Budweiser is skunk piss and sponsors Manchester United. Plus, real men drink Busch Light.

Known for: Giving lengthy interviews, having his mouth write checks his body may or may not be able to cash, apparently also giving updates to reporters in the tunnel at half-time.

Impact: Runs the gamut from severely negative to blissfully positive. Of course, it's all contingent on actually following through on the promises he makes in this extended interview. Full marks for guaranteeing that the club won't sell any of its big-time stars, demerits for reiterating Gillett/Hicks talking points. As usual, who knows what to make of anything coming out of anyone's mouth. Except Sarah Palin. She's like the oratory equivalent of King Midas.

Known for: Being in every newspaper, blog, website, and magazine in the Milky Way, being the only Premier League manager to carry a cross while managing, and then doing this today.

"Before we start, some facts. Facts: we are not playing well and we feel sorry for our fans. I have experience as a manager and we know things can change in football every week, so we have confidence that we will improve. Stoke is the first opportunity to improve and we will try to do this. We have to focus on Stoke and not talk too much about the other things. It is better to talk about football and about Maxi. It is the way to change things for us - we have to concentrate on the game. Everyone has to take responsibility. The main thing we can do now is to prepare properly for the game, and we will try to do this and see if we can improve against Stoke. I understand journalists have to ask questions, but the best thing for me and the team is to prepare for the game properly and then try to start winning games. If we lose, everybody loses here - all the fans, players, staff and the club. The fans know they have seen us play really well over the last five years and also that we can improve and do better. I understand their frustration, but we are in the same situation. We want to win. The staff, the players and everybody here wants to win for them."

The man loves his facts. More at the link above.

Impact: More on this in the coming week(s), trying to work something out for the site.

Known for: Generally playing like shit, acting like they don't give a f*ck, giving up injury-time penalties, watching a second division side play them off their own pitch in front of a less-than-adoring crowd.

Impact: Undoubtedly negative. A performance that has been criticized up and down England, and rightly so. Shocking, disappointing, enraging. And that was just Emiliano Insua!

Known for: Ripping my heart from my chest and showing it to me, Temple of Doom style. See banner pic.

Impact: I may never love again. But that's personal; for the club, it's clearly negative. Moreso than the injuries to Benayoun, and even Gerrard, this loss presents a major challenge for Rafa Benitez. As he probably should have done already, Torres' extended injury calls for a change in formation and, obviously, personnel. There's not exactly a bevy of talent waiting in the wings to cover for him, but Ngog has developed nicely (besides Wednesday) and could partner with Kuyt in attack. There's my rose-colored glasses. And yesterday Torres' mouth joined in the assault, telling the owners they need to buy big. Or else. Maybe not so much with the "or else," but good advice nonetheless.

Okay, so on to Stoke.

As you'll remember from last season, Stoke parked the bus in both matches and came away with two points, frustrating Liverpool despite waves of attack. Earlier this season was a different story, as Liverpool hit four and were dominant from the outset. Tomorrow, I think, is a bit of a toss-up.

Liverpool will be without Fernando Torres, Steven Gerrard, Yossi Benayoun, and Glen Johnson through injury. Apparently there's also questions about Pepe Reina's availability, as his absence on Wednesday is now explained by a back injury. Nabil El Zhar and Martin Kelly are also still lacking in fitness. The Reds will travel without Ryan Babel, who's evidently been left out of the squad.

Maybe the biggest, if not only, bright spot is that Maxi Rodriguez has been cleared to make the trip. He was officially introduced and awkwardly photographed today, and Rafa says that while he's not a "proper winger" he's a player that will figure heavily in the club's plans. I'm not convinced that he starts tomorrow, but I'd love it if he did.

What's left for the Liverpool is a squad that will need to play out of their minds to match the result from earlier this season against the same competition. The Britannia is never an easy place to play, and the fans have a reputation for creating a raucous atmosphere. With Liverpool seizing on the brink, I expect things to be no different tomorrow.

Any guesses at a formation or personnel are thrown completely out the window for me...Reina's not fully fit, we don't know if Degen or Darby are making the trip, Skrtel could return, Insua was awful, Aurelio is likely needed on the left flank, Masch is back after missing four games, Aquilani has struggled...but I'm guessing Kuyt and Ngog will both be ok. I mentioned yesterday that I think this calls for a switch to a 4-4-2, but my blood pressure won't spike if we see the 4-2-3-1 yet again. But it's also a match that calls out for some younger talent--Dani Pacheco, or even the recently re-signed Nathan Eccleston would be nice to see.

As for Stoke, there hasn't been much turnover since last season. They'll still pose a threat to Liverpool in the manner they did last season--jam things up in their own half, hope to expose Liverpool on set pieces or Rory Delap throw-ins. They're never going to kill Liverpool with pacey, attacking football, but they're extraordinarily dangerous if allowed to play their preferred style. Normally I'd say it's a match Liverpool should win, but with this Liverpool you never know. I think if the club max their output they have a very good chance at taking all three points, but it's going to likely be a grind. And thus, Liverpool have been humbled.