"The way we performed was not acceptable."

Share All sharing options for: "The way we performed was not acceptable." 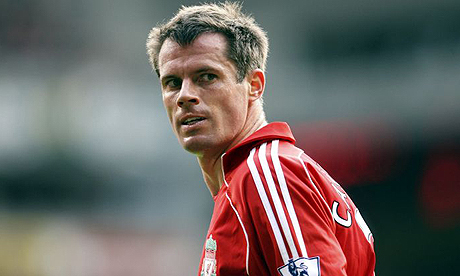 Reaction to yesterday's performance has been roundly negative, ranging from the expected calls for Rafa's head (albeit from noted publicity hound Ronnie Whelan) to continued calls for the owners to hit the bricks. Jamie Carragher, however, feels the burden should be placed on the shoulders of the players. Whether or not it's lip service, it's refreshing to see someone associated with the club stand up to be counted, rather than shucking the blame or just saying, "that's football." From the Echo:

"It was a very bad night for Liverpool and we can't disguise that - we had to do more against a side from a lower league. We have to apologise for the way we performed. We have to give credit to Reading, hold our hands up. We all like to win but when you don't, you have to be a good loser. We have to accept they deserved it. But, at the same time, we have got to look at ourselves and the way we performed was not acceptable. We've got a massive game coming up against Stoke now. It will be very tough, as we played extra time and we have got to show enormous character to come back.

"But that's what we have got to do. We have got to move on but, at the same time, we have to say sorry to the fans who came to Anfield and all those watching on TV. We have got to do better and we have got to recover. There are still four months left of the season; it's been tough and this result has made it a little bit tougher for us. But we are Liverpool. We can't be where we are and we have got to improve. Liverpool Football Club demands certain standards. At the moment we are not reaching them and we know that but we have all got to come as one and stick together.

"The stuff that goes on off the field has got nothing to do with it. I don't think so anyway. If you say it has, you are only making excuses. Whatever goes on behind the scenes, we have got to do our own job."

In the short term, I think this is the only way to look at it. Longer-term, there obviously needs to be changes. Owners, manager, players, whatever, things will be changing. But for the foreseeable future, Liverpool still need to put forth an effort that can be defended. As I mentioned yesterday, it's been too often that a poor performance is explained away as a direct result of boardroom disquiet. I'm hopeful that the views of the vice-captain bleed into the rest of the squad, and that the road back/new season/recovery starts Saturday afternoon.