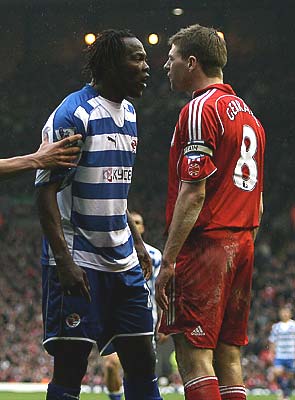 Team sheets are out, **UPDATED** Maxi Rodriguez deal done, and a couple bits of other news.

You can also watch at ITV.com in the UK...currently I'm trying to figure out a way around region-restricted content.

Only real surprise here is that Cavalieri starts in place of Pepe Reina, but even that isn't hugely shocking. Reina has played nearly all of Liverpool's matches this season, and in theory today shouldn't be the greatest of tests. Ha, good one, me. Degen at right back was also slightly unexpected, as it would have been nice to see another run out for Stephen Darby, who didn't even make the squad. It's back to the 4-2-3-1 for the Reds, although in practice it should be more of a 4-1-3-1-1, but that's too long to type on a consistent basis.

There's one match-up of note today, and it's Emiliano Insua and Jobi McAnuff. Insua had a hell of a time at the Madejski trying to contain McAnuff. The Argentine will need to do much better today, particularly with Benayoun in front of him, who will provide far less cover than Aurelio did a fortnight ago.

And confirmation from the club that the Maxi Rodriguez deal has finally been finished. He agreed to a three and a half year contract and will wear the number 17 shirt. No secret that I've been excited for this to go through, and apparently so is Rafa:

"We were looking for players with character and a good mentality. He has played for Argentina and Atletico Madrid and is a player with personality. He can play in three positions - on the right, left or as a second striker - and is someone with a very positive mentality, which is what we are looking for. He is comfortable on the ball, can pass and keep possession. He is good at getting into the box and scoring goals and a good finisher. Every year he gets five to 15 goals from the right side of midfield. I know he was not doing as well as he did in the past at Atletico Madrid, but he is doing really well with Argentina and wants to impress for the World Cup.

"He knows Mascherano and Torres and he can provide a lift for some players. I think he will adapt to English football because he is a clever player and takes up good positions on the pitch. It is a question of adjusting to the pace of the game and he will need some time, but with these players around it will be easier for him. Rodriguez will be a different kind of player for us and also competition for Kuyt on the right side, along with Nabil El Zhar and Yossi Benayoun. He will give us the opportunity to manage some of the other players and rest them if necessary to keep the level of the team. I have been talking with him and he is really pleased and ready to come here. I have told him what we are expecting from him and he is ready for the challenge."

Encouraging stuff for Liverpool, particularly because, as Rafa notes, he's a different type of player--more similar to Albert Riera than Kuyt or Benayoun. Let's hope international clearance is a breeze and he joins the squad soon. A couple other links from the official site's Maxi extravaganza:

There's been plenty of talk the last few days about how important the FA Cup is to Liverpool, so if they're going to walk the walk we can expect a full-strength side today against Reading. Apparently some early snow on Merseyside put the fixture into jeopardy, but it's turned to a slushy mix. I can read weather.com just as well as the next guy. No word, however, if there's enough salt.

It looks like Maxi Rodriguez has finally arrived at Anfield and will watch the match today. No word as to how long it will take beyond that point, but it does mention that he'll return to Spain to wrap things up. Tempering expectations, but pretty excited about this one.

And if you've got the next three hours until game time, you can read the official site's interview with Christian Purslow, managing director of the club. He denies a lot of stuff that's been in the papers lately, in particular the idea that Liverpool would be selling any talent because of financial difficulties. Could just be a bunch of smoke-blowing given that it's coming on the heels of a less than flattering week for the club, but reassuring nonetheless.