Share All sharing options for: Tom Hicks Jr. Resigns: Power to the People? 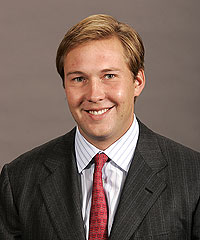 Turns out you can't give someone an obscene nickname via email.

Fallout from emailgate a few days back, and it's ended with Tom Hicks Jr. resigning from his position as director after pressure from Spirit of Shankly and other board members. While neither the instigating email nor the full response were released, the heart of the issue is Junior's response to an SOS member's email about transfer funds for Rafa Benitez, which labeled the fan an "idiot" and ended with the common Texan salutation, "bl*w me f*ck face." Today he was a bit more G-rated, apologizing for his words and emphasizing his "great respect for the club."

SOS called for his resignation immediately, and there's plenty of talk about this event as a shining example of fans still having a voice in an increasingly corporate club football culture. It's unfortunate that something like this occurred, considering the last thing Liverpool need right now is more negative publicity. But if this is what it takes for the club to start moving in a more positive direction, I welcome it. So do SOS, who patted themselves on the back with this statement. The official site took a decidedly more vague approach with their statement, instead focusing on the promotions of Ian Ayre, Philip Nash, and Casey Coffman. I wonder why they disabled that sparkly new comments section on this one...

That about does it for news today, unfortunately. Hopefully there's enough of a thaw on Merseyside this week for Wednesday's match to take place. I think you can't get back to the pitch quickly enough after something like this.