"I feel reborn and want to smash the world."

Share All sharing options for: "I feel reborn and want to smash the world." 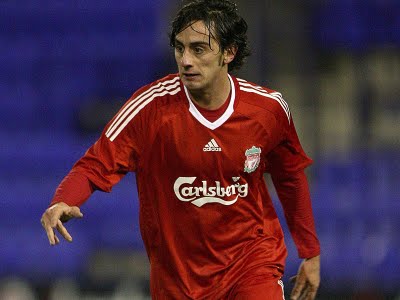 Apparently those public relations trainings with Conan the Barbarian are working.

Whether through confidence, ignorance or painkiller-induced delirium, Alberto Aquilani has flopped it out on the table in regards to the impact he feels he can make at the club. Other than sourcing the quotes below I can't recommend clicking that link, which is another 75-point literary explosion.

"Rafa Benitez and my team-mates have told me that before this season the whole Reds game went through Xabi. With me just in front of Javier Mascherano and Steven Gerrard just behind the front man, we now have even more solutions in midfield. Xabi and I are two very different kinds of player. He is a much better playmaker, the one who starts the play. I like to get hold of the ball more and go inside or perhaps shoot after a 'give and go' with a midfield partner such as Stevie Gerrard or a striker like Fernando Torres, who is a magician when it comes to opening up space. In the early part of the season, we struggled a bit because I was injured and the team lacked this midfield geometry. This is the manager's fantasy. I feel reborn and I want to smash the world. It was so hard being all that time without playing. Believe me when I say to you that watching your team-mates training and playing while you do nothing but physiotherapy, gym exercises and routines in the swimming pool for rehabilitation is really difficult. But now that is over. I am fine and I just want to put it all behind me and not think about anything but playing. The rest will follow. If I remain in good health, I know I can play at a certain high level. I know I have the confidence of the manager and my new team-mates. I know what I am worth on a football pitch and I want to do my absolute best in a very difficult season like this for the club and the fans."

Normally players will wait until getting a full season under their belt before smashing the world, but I like this backwards approach. Of course, this means he'll have to follow through, and there's not much patience for him to start making a big-time impact. It's unfair (at least the lack of patience part), but it's true. He's also going to need some things to work in his favor, including a return to fitness for Albert Riera and Glen Johnson, as well as the finalization of the Maxi Rodriguez deal. If and when these things happen, the the starting eleven he's getting at could be very solid:

Theoretically, the only vulnerable spot in this eleven comes on the left side of a back line that Rafa feels needs to improve. Both Insua and Aurelio have had struggles with making a consistent impact, and the latter has had these struggles across multiple seasons. But both are also serviceable, hard workers, and it appears that Insua is the left back of the future, so it'll have to do.

Obviously this eleven leaves out two major cogs of the current Rafa machine: Dirk Kuyt and Yossi Benayoun. It's not secret that Kuyt hasn't hit peak form this season, and with Maxi Rodriguez on the horizon, it might be as good a time as any to give the industrious Dutchman a break. And Benayoun is probably the most creative player in the Liverpool side, but I think putting him on the wing subtracts from his game. He's much better suited to a floating midfield role, and could be more influential sharing time with Aquilani and/or Gerrard.

With Rafa, though, this sort of thing is often an exercise in futility. He's shown loyalty to a fault at times with player selection, and it's foolishly optimistic on my part to anoint one newcomer and a potential signing as part of a stronger starting eleven. The Lucas/Masch partnership in central midfield could continue, Kuyt could be preferred to Maxi, and Riera and Johnson both have work to do to recover fitness. But whoever the starting eleven are, Liverpool need to start grinding out results.

And in news about players who won't be making an impact (or never really did), it's all over at Anfield for Andriy Voronin, whose move to Dynamo Moscow was finally completed. No word yet if he can have his medical on the beaches of Miami, but I'm guessing the leopard-print tracksuit will be on the cutting edge of Russian fashion. Best of luck to Andriy with his new club.

Are we really still talking about this? Is anyone surprised? My broken heart has turned cold. Interesting read, but let's at least start to move forward, folks.

Lastly, the official site is running a pretty cool feature about the history of the club. Sure, it's marketed at children, or those not born in the later part of the 19th century, but you can't go wrong with free videos. Good way to pass the time until Wednesday's match with Reading, plenty of highs, and unfortunately a few tragic lows.

Enjoy the rest of the weekend, let's hope Liverpool hit the ground running this weekend.