Share All sharing options for: Our Gear Still Sucks 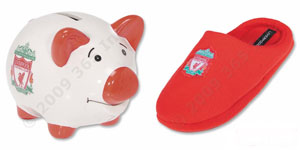 One of the first posts I ever made was about how official gear from the stores in the USA is just awful. There's not really any selection and it looks like the merch that is sent here are only the things that wouldn't sell in the UK. As excited as I am about piggy banks and slippers, I would really appreciate it if someone would throw us a t-shirt that looked cool.

Here's a few shirts I found from a site that has a lot of Mexican league stuff.

One of the shirts is from Barcelona so apparently to have cool looking threads here, you have to support a club from a country that speaks Spanish. It's really annoying because I think any fan wants to show their pride in whatever team they support. T-shirts are one of the cheapest bits of clothing to produce, so the lack of in the club shops is astounding. Maybe that's why we can't find funding for a new stadium, because we can't master the basic art of merchandising.

Maybe my annoyance comes from all the Tecate that I've been drinking today. However, when constantly confronted by financial constraints on the club with regards to expansion and transfers, it seems that the most basic source of revenues isn't being utilized. We should have Liverpool everything worldwide, shirts, shoes, pants, jewelry, toys, everything! But it needs to be done right. We need things that are cool and I'm sorry, but I really don't want a Ryan Babel bobble head, though it would be a big head.

By the way, it's coming from an unconfirmed source, but this blogger has reason to believe that Jack and Martin are secretly Spurs fans.