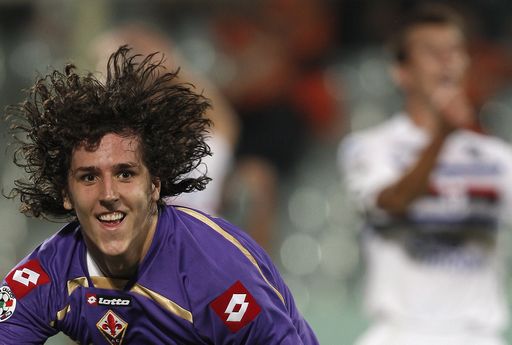 Two goals from Stevan Jovetic have Liverpool at sixes and sevens leading up to the break. This whole thing about one shot on goal doesn't seem to be working.

Free header from a corner for Lucas in the 47th minute is a bit tall...going to need a lot more if Liverpool are going to even contest here.

Dirk Kuyt with an effort from the right edge of the box, well saved. Not the best of chances, but anything on goal is a welcome sight.

Over on the Fiorentina Offside there's plenty of discussion about the match, including one of the more patronizing comments I've read that one of the commenters heard from an announcer--"Fiorentina are playing like a Premier League side tonight." Watford and Derby blush.

Another fine tackle by Lucas. Babel comes on for Insua, Aurelio to play deeper, let's hope there's something coming soon.

Good ball from Skrtel for Torres. Best cross all night? I weep.

I don't want to say that Liverpool were embarrassing, because that may imply that Fiorentina weren't deserving of the victory. It was comprehensive, it was humbling, it was roundly deserved. Fair play to the Viola, shocking performance from the Reds.