Only 18 more rounds to go until the Carling Cup final! 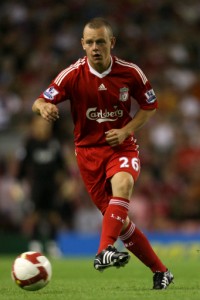 After glancing at Liverpool's starting eleven, there was no mistake that Rafa viewed this year's Carling Cup the same as he has every other year...despite declarations otherwise. Not to say this side wasn't talented enough to win, but as has become the case with the bastard son of top-flight cup competitions, it was clear that the Carling Cup will yet again provide an opportunity for Liverpool's also-rans and reserve stars. Which isn't entirely negative. A mixture of first team talent in familiar places: Jamie Carragher, Javier Mascherano; quasi first team talent in new places: Fabio Aurelio in a defensive mid/wing role; young talent trying to break through: Ryan Babel, David N'Gog; lastly, the lepers: Phillip Degen, Andrea Dossena. Jay Spearing has been knocking on the first team door for some time, Diego Cavalieri hasn't seen competitive football since January (luckily he has a potentially NSFW way to keep busy), and certain Greek imports still need to find their feet in English football.

And as it turned out, the atmosphere at Elland Road Tuesday night almost had you believing the Telegraph.

After some early pressure, Liverpool found themselves on their heels, where they would remain for much of the first half. They were nearly made to pay for their inconsistency in the 11th minute when an unmarked Michael Doyle headed wide of goal, and a minute later it looked as though Leeds had taken the lead. Lubomir Michalik headed a corner towards goal, and Jermaine Beckford poked it past Cavalieri. Luckily for David N'Gog, who kept Beckford onside, Luciano Becchio smashed home from an offside (?) position. Slightly questionable call, but clearly another convincing argument to slowly strangle the life out of zonal marking. Almost 9 out of 10 for the year. I'm not Spanish, not a magician, and I can't grow a goatee, but I'm concerned.

The second half started much the same, and Leeds always looked more likely to score. Completely against the run of play, then, when N'Gog put Liverpool in the lead in the 66th minute. Fabio Aurelio's cross was headed out the box, and when Javier Mascherano's volley spun back in, N'Gog camly collected, turned, and slotted past Shane Higgs. A cool finish for the young Frenchman, and some space to breathe for Liverpool. 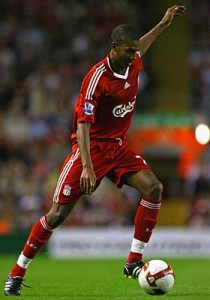 Rafa soon began to ring in the changes, and it was clear that Glen Johnson and Steven Gerrard had the class to guarantee Liverpool's place in the fourth round. On the whole, it was an uninspiring effort, particularly in the midfield. Surely a result of some new faces, but I was not particularly blown away by Mascherano tonight. Clumsy and lazy at times, he looked as though he'd have been happier next to the boys on the bench. Not to mention the possibility of an FA charge for a poorly placed forearm. And despite the goal, David N'Gog is not yet the answer by himself up front, but his effort was not helped any by the shortcomings of the midfield. The play of the defense was largely unremarkable--Degen looked good for spells but came off with a knock, Kyrgiakos showed flashes of competence, Dossena was able enough, and Carra, struggling with form of late, started to right the ship. There were rumors that Daniel Agger was to be back in the side, but it seems to have been too soon. Here's hoping he's close.

Hull City come to Anfield on Saturday, and Liverpool will look to take it to them early. Patriotism aside, I'd be fine with that.