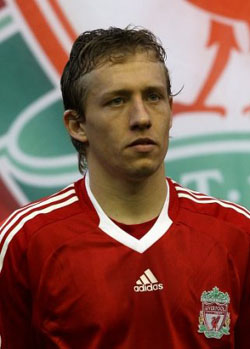 I think everyone has that one player in their club that they just don't like. For me, that player is Lucas Leiva. Why exactly do I have such a distaste for the young midfielder who has won Olympic gold and was previously named Brazilian Footballer of the Year in 2006?

Maybe it's not him specifically, maybe it's the faith that Rafa puts in him after his repeated mediocre or horrible performances. After the draw against Fulham last season when he was practically booed off the pitch, Rafa came to his defense saying what a great footballer Lucas is. All I could think was, "When??? In training?" Now, don't get me wrong, his resume is impressive for a 22 year old, but this sport is all about what you're doing now. If you're not producing now, it doesn't really matter what you did last season or the season before that.

Now, I read that he's considering a switch back to Brazil to Corinthians because of his lack of first team action. Personally, I've seen him way too much of him on the first team already and would not be hurt at all if Lucas ended up back in Brazil playing alongside Fat Ronaldo.

If you really want to do well at Liverpool, Lucas, here's my advice: You're only 22 and your name isn't Messi. Shut up and work hard.