Johnson Unveiled and Stevie G a Red for Life

Share All sharing options for: Johnson Unveiled and Stevie G a Red for Life 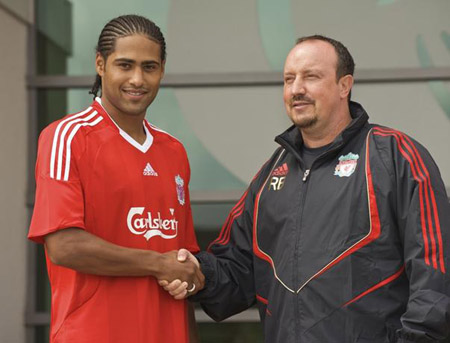 Today, Rafa paraded Glen Johnson in front of the press. While showing off our new right back, he denounced the current condition of the transfer market and defended the price on Johnson.

"We had to pay big money, the market is now crazy. It is all money, money, money now. But we were signing a good player, an England player, and that is very positive.

"He has a good mentality, and when I spoke to him first it was clear he wanted to come here.

"Things have changed. You have to adapt to a situation. Manchester City and big clubs in Europe are spending big money, so the market has changed and we have to work harder."

Also in the realm of things that we already knew but is always good to see in print, Stevie G signed an extension on his current deal that will tie him to the club for the next four years. That will make our captain 33 at the end of it at which time he will more than likely retire.