A Little TOO Quiet

Share All sharing options for: A Little TOO Quiet

Thus far, players are making moves all over the place, well, except here. Aside from the destined to be overpriced addition of Glen Johnson, there hasn't been any moves in or out by key players. Before the transfer window opened, it was believed that Rafa would try to move some "fringe" players to pay for signings, but that has yet to be the case. Where he found over £20mil for a right back is beyond me. 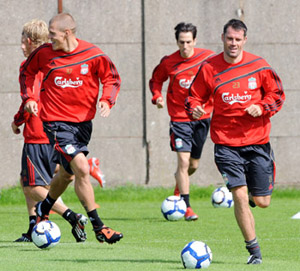 Barcelona are rumored to be after Reina and Mascherano while Real Madrid are after Xabi Alonso. Whether they will want to pay Benitez's asking price for our midfield maestro is a question yet to be answered. It seems as though whatever price that Rafa has put on Alonso is considered much too high by the Spanish club. After spending £130mil on two overrated midfielders, one would think they could come up with some dough for a good one.

I really hope Xabi doesn't go anywhere because I see him as part of the spine that makes the team work. No one can match his passing ability. It would also be nice to see Arbeloa stick around. He was one of the most consistent players last season, but I do not know that he will want to play off the bench with Glen Johnson in the picture. Personally, I was happy with Carragher at right back now and then. The only player that might go would be Mascherano. I just don't see a defensive midfielder working in the current setup. The only thing that could possibly change that is if Gerrard continues to play right behind Torres.

It was said today that Rafa has challenged the youngsters to show that they have what it takes to be in the first team. If players like Pacheco, Kelly, and Nemeth can step up and earn a place in the squad, then hell, maybe we won't need to buy or sell anyone else. Keep your fingers crossed.

Oh, and my boy Yossi got an extension on his contract. Woot!