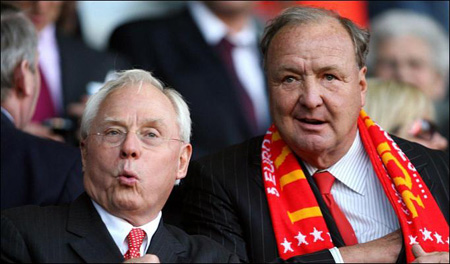 That's right kids, you have probably already heard that those evil Yanks, Tom and George, have refinanced their loan for another year. Somehow they convinced the Royal Bank of Scotland and Wachovia that they will be able to keep servicing their debt. On the same day of the refinancing deadline, ShareLiveroolFC, in conjunction with the Spirit of Shankly, made a revised proposal to buy the club.

They've apparently realized that no one is going to pay £5,000 for a share and have lowered it to £500. I remember someone a while back saying that it wouldn't work at 5,000--hmm..who was that? There's all kinds of little figures on their site that will make your head explode, but what they lack is actual money, and plans to get additional funding as needed for pesky things like players and stadiums. Now don't get me wrong, I think the public owning a football club is a good idea, but I think this club is valued too high to make it work. It would go over much better with a cheaper club like Newcastle. There, I've planted the seed. Go get 'em, Toon Army!