Say It Ain't So, Alonso

Share All sharing options for: Say It Ain't So, Alonso 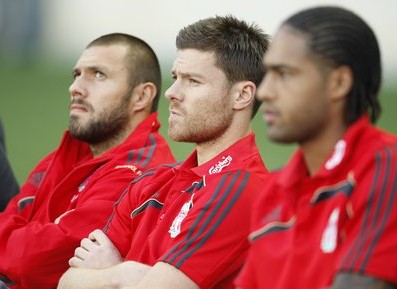 When one of your favorite and most important players is continually linked with another club, all you want them to do is come out and pledge their allegiance to the team and supporters. Unfortunately, sometimes that player really does want to go elsewhere and even though they've tried to keep it hush hush for fear of a backlash from the fans or the club that they are currently with, it gradually sort of just comes out. They end up saying what we already know.

It's always a great feeling when Madrid want you, especially considering the phase of the career I am in now...I will talk to him [Benitez], sure, but the first thing to do when I arrive [in Austria] is to greet him.

But I imagine that in the next few days, there will be time for all that, even though in reality, there's nothing in particular to talk to Rafa about. It's the clubs who have to negotiate to reach an agreement.

Okay, so Xabi wants to leave and doesn't have any interest in talking to the manager that did not even rate an invitation to his wedding. Who will fill the void in the midfield when the inevitable happens? Will it be Aquilinai? Or, will the tactics significantly change and force us to rely more on wingers like Ashley Young? Either player would be a great addition to the squad, but you know where the money will have to come from...

After registering the first loss of the preseason to Rapid Vienna (1-0), the squad will head to Thailand and then Singapore where they will say hello to Kai and Nadia. Hopefully, they will be able to provide some photos from the match. And hopefully, Nadia's will cover more than the backside of Fernando Torres.