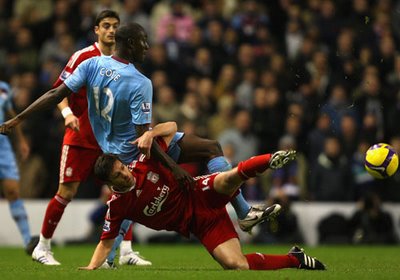 The coast looks to be clear after the fallout from Wednesday's Champions League Apocalypse, so let's look to today's trip to Upton Park.

The big news from Liverpool is that Xabi Alonso is not quite fit and won't make the trip. It doesn't seem like anything that will threaten his fitness the rest of the year, but at the same time rushing him back to the squad would be ill-advised. I've done a poor job of hiding my Xabi man-love this year, and it would be a disaster to see him aggravate an injury that shouldn't keep him out past today. Masch and Torres are both fit to play and will likely feature in the starting eleven. Especially with Xabi out, Masch will need to be on form to stabilize things. For the first time in what seems like awhile Rafa will have the luxury of choice, and it will be interesting to see how things shape up, particularly in the midfield.

These teams played out a 0-0 draw back in December at Anfield, a match that, quite honestly, I can't remember much about. It was the second consecutive scoreless draw at home for the Reds and was an early part of Liverpool's struggle during December and January. Not exactly Liverpool's finest hour(s).

But West Ham aren't exactly a bunch of slouches. Gianfranco Zola has been a revelation for the Hammers after a rough start, and they're now looking to seal their UEFA Cup/Europa League spot in the run-in. He doesn't have a squad of superstars, but he's gotten the best out of his men time and again.

It's been all over the place that Liverpool can still steal the title at the end, and I truly believe that it could happen. Nearly every player on the squad has, at one point or another, mentioned that the title dreams are not dead. This is encouraging enough, but I think Rafa's recent statements about long-term success mean the most for me. There have been plenty of up's and down's this year, but it's fantastic hearing from the manager that he believes this squad is only a player or two away from the title challenge year-in, year-out. Now it's just a matter of finding that player or two and putting in those title challenges.

Come on you Reds!