Farewell to the Finn

Share All sharing options for: Farewell to the Finn 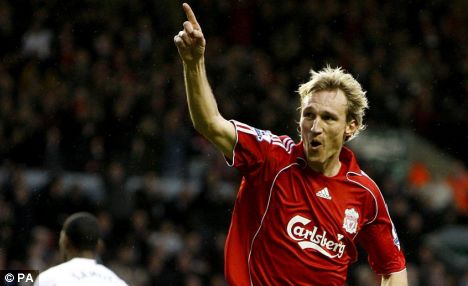 News from the club today that Sami Hyypia will be leaving the club at the start of the summer, joining Bayer Leverkusen for a 2-year spell. Hyypia's playing time markedly decreased as the season wore on, but he enjoyed something of a renaissance earlier in the year when Liverpool's younger defenders were lacking in form and fitness. Rafa's take:

"We are disappointed because we will miss Sami.

"He is so important that we talked about him becoming a member of the coaching staff in the future, but he thinks he can play more and wants to be involved in the first team.

"The fact that we were talking to him about becoming a coach shows how much we think of him – he is a perfect professional.

"We were talking to him about an extension to his contract and the guarantee of becoming a member of the coaching staff. That shows we were really pleased with him and how good he is as a professional.

"In every single training session and in every single game he gives 100 per cent for the team and he has been a fantastic servant to this club.

"He is always keen to help the youngsters and he sets them a really good example but he has also been very supportive of me and my staff since I first came to Liverpool.

"From my point of view, I have been really pleased to work with him and now I must wish him luck for the future.

"All the fans and all the staff at the club are sad. We were trying to keep him.

"With three other centre backs at Liverpool it was going to be difficult for Sami to play as often as he would like so he has decided to go to Leverkusen and, like I said, we are happy for him.

"We are really happy for him because he can play two more years to his maximum with a good team in a good league. So we must be pleased for him."

The man has surely cemented his place as a Kop hero, co-captaining the treble-winning side of 2000/2001 and serving as full captain until Steven Gerrard took over in 2003. He popped up with some humongous goals for Liverpool as well, most notably a wonderful volley for the opener against Juventus in the knockout stages on the way to glory in Istanbul, and a dynamite header to level things at 1-1 against Arsenal last season in the Champions League quarterfinals. Full interview from the official site with the man himself here. He will surely be missed both on the pitch and off. Here's hoping for a great Kop send-off for Sami and a healthy future.