On Newcastle, Agger, and other news

Share All sharing options for: On Newcastle, Agger, and other news 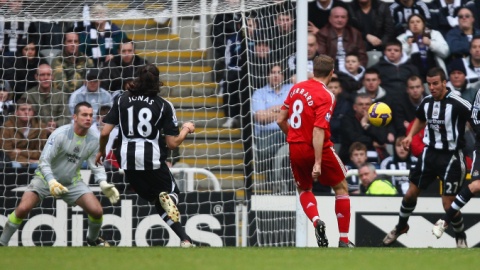 I'm not sure that today's match deserves much more than a paragraph, but I'll end up writing much more given my recent school-induced hiatus from writing anything worth reading. No promises that this will be worth reading, but there will at least be more of it.

Newcastle are clearly a club in crisis and this one may have sealed their fate. It seemed that every other comment from the announcing crew today (who were far from spot-on in a number of other instances) focused on the disaffected, often disinterested play of Newcastle. You know it's trouble when the spot-shadowing technology is used to identify three midfield players that, in one of Newcastle's only forward movements of the day, failed to push forward after some good work on the left wing by Damien Duff. You almost feel sorry for Alan Shearer, who gamely played along with the Kop's chorus of "You're better off on the telly" and is charged with the impossible task of saving that sorry crew.

This one was never in doubt despite Newcastle having a majority of possession for the first fifteen minutes or so. Possession never transitioned to threat, and after settling in Liverpool never looked back. Kuyt's header flew past the far post in the 18th as the first real marker of Liverpool's intent, and soon after they had their first. Good work by Dirk Kuyt on the right to get the ball across the face of goal, and Yossi Benayoun was left to knee one into the empty net in the 22nd minute. Possibly offside, but a just reward for their dominance. It didn't get any better for Newcastle, who were inept at best prior to the goal and helpless afterwards. Kuyt got his own in the 28th from a corner, with Daniel Agger getting in the way of Habib Beye, leaving Kuyt free to head home. 2-0 has never felt like such a distance.

Liverpool had chances throughout the rest of the match but never looked strained. They trotted the ball up the pitch at their leisure and dusted any Newcastle forward movement off without a second thought. Xabi Alonso hit the underside of the crossbar twice with sublime curling efforts, one from a near standstill. Steven Gerrard did everything but score, missing the target on a few occasions and coming tantalizing close from 25 yards with an effort that smacked the crossbar and bounced away. Lucas rounded things off with his first Premier League goal, a free header from a Fabio Aurelio free kick in the 87th minute, which was fittingly spectated by four Newcastle defenders.

Things didn't end exactly stress-free, though. In the 77th minute Joey Barton was sent off for a clumsy, malicious two-footed tackle on Xabi Alonso. At first I thought it was a harsh sending-off, simply a case of the boy's reputation preceding him. After the replay, my opinion reversed. At this point you can't separate Barton from his reputation, and with these types of challenges it's no wonder. To make matters worse, Alonso was stretchered off. His midfield partner limped off ten minutes later after catching a boot on the ankle, but it seems that Rafa is hopeful on both for next week. Also mentioned is Fernando Torres, who aggravated his niggling hamstring in training but should be back for the visit to Upton Park come Saturday.

It was another solid performance by Liverpool. Nothing remarkable, but this match obviously didn't require anything remarkable. I was most impressed by the way Liverpool dictated the pace of play for almost the entire 90 minutes. Certainly Newcastle played their part in allowing this happen, but I got the feeling Liverpool were completely in control of themselves at all times. This was a feel-good match for the defenders, who haven't been on top form as a unit as of late. Any time the other side doesn't get a single shot on target something has been done right defensively, regardless of who that other side is. 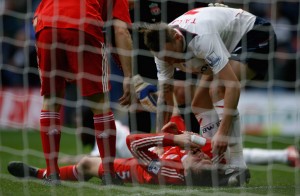 On the topic of defense, the news came out yesterday that Daniel Agger has extended his contract for four additional years. This is *outstanding* news, as I think he deserves to be in the "spine of the squad" discussion along with Torres, Gerrard, et al. Injuries and the form of Martin Skrtel prevented this from happening earlier in the season, but with Skrtel's form slipping of late, Agger has featured more and hasn't disappointed. Given regular time in the starting eleven, I think he could become one of the feature central defenders in England if not Europe. He's no-nonsense defensively (witness picture to the right-broken finger, slides into post and loses tooth to clear the line), gets forward like no other central man in the country, and has one of the fiercest shots in the squad, which he flashed again today, forcing Harper into a good save.

So what does his signing mean for the crowded central defense? I wouldn't be surprised if Sami Hyypia is offloaded during the summer, with other clubs voicing serious interest, and given the shaky form of Martin Skrtel locking up Agger is the safest bet. As Francis noted in the comment section of the earlier post, Agger hasn't been shy about voicing his playing time concerns, and you have to think that signing a four-year extension wouldn't have happened unless regular playing time figures to be in his future. I'm not convinced that Agger can't be effective on the left, and besides a switch to a three-man back line or pushing Carra to the wing I don't see how both Agger and Skrtel can feature regularly. Carra's the only one of the defenders that is "untouchable," but as I mentioned earlier, I think Agger could/should soon be in that category. For now I'm just glad to know that he won't be going anywhere come summertime.

To close off the marathon post, some other news and links...

Dalglish organizes charity game, future still undecided: Outstanding news towards the end of April that the club are working to get King Kenny involved in player development. The sooner the better I say, clearly the man loves the club and could do wonders in passing on its spirit to Liverpool's youth.

Alonso and Masch staying put: The rumors about Xabi leaving won't die, but this is at least encouraging. Stellar performances from both again today...the performance of this duo has been one of the brightest spots of the season.

Birmingham's back: Congrats to Birmingham, who's now back in the Premier League after a one-year visit to the Championship. Let's hope next season Liverpool play them better than during 2007/2008.