Share All sharing options for: FWA Footballer of the Year: Steven Gerrard 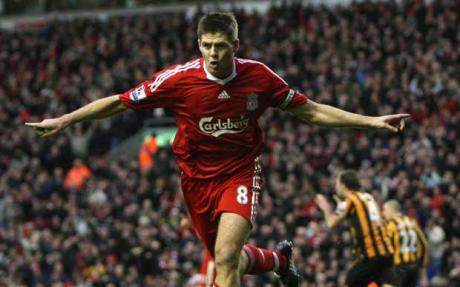 It was announced today that Steven Gerrard is the Football Writers' Association Footballer of the Year for the 2008-2009 season.

Despite missing a handful of matches due to injury, Gerrard has matched his career-best goal return with 23 in all competitions this season with two league matches left to play. He's been the match-winner for Liverpool on numerous occasions and is a part of one of the best attacking duos in recent memory with Fernando Torres. This is the second player of the year award after he won the PFA Fans' Player of the Year earlier this month. He missed out on the PFA Career Service Award, but he rightly deserved to be in that conversation as well. A great year for Liverpool's skipper; here's hoping for many more.

"When you look at the quality of the players there are in this league, it's a great privilege to win this kind of award.

"It's made even more special for me because I am following in the footsteps of Liverpool players like John Barnes, Steve Nicol and Kenny Dalglish who were heroes of mine.

"Then further back players like Ian Callaghan and Terry McDermott who were heroes to my dad and so many other Liverpool fans.

"It's not just the Manchester United players - when you look at the players the likes of Chelsea and Arsenal and other teams have got, they all have fantastic players throughout their squads now.

"The quality is getting better and better each year so to win this award is a great achievement for myself.

"But I've had fantastic help along the way from everyone at this football club.

"My family and friends come every time I play and everything I achieve in football they are a very big part of that because they are there for me 24 hours a day, seven days a week.

"But the biggest thank yous have to go to the manager, the coaching staff and my team-mates.

"Individual awards are great but you don't win them without great help from those people.

"I got a phone call from Ian and was debating whether or not to take the call because I thought I might have been in the papers for the wrong reasons!

"But when I did take the call and he delivered the good news it was a great feeling for me."