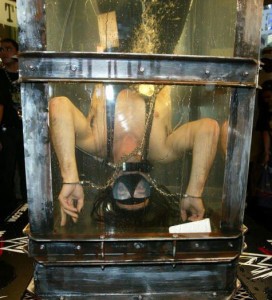 It's hard for me to describe the sound that came out of my mouth when Yossi Benayoun found the net in the second minute of stoppage time today. Part surprise, part joy, part allergy season, it was definitely a honk of ecstasy. For the eighth time this season, Liverpool get an injury-time strike, and this was one to win it. This match had spells that were frightening, encouraging, boring, and, finally, magical. Liverpool are, for the first time since early February, at the top of the table. This comes with caveats, of course, and two games in hand for the defending champion makes for some pretty big caveats. After today, though, it seems increasingly possible. Maybe especially today, because for the first 92 minutes it seemed that luck conspired against Liverpool after a season in which most of their successes were attributed to luck. This one is especially sweet because Liverpool got the result they needed after it looked to be a damning day for their unlikely title bid.

Craven Cottage, to be sure, is not an easy place to play. For the other three of the top four this season, it was downright gruesome. Arsenal and United fell, and Chelsea conceded a late equalizer to drop two points. Add into the equation that the United defeat occurred in the last round of Premier League matches and you knew Fulham were going to come out high on confidence.

Fulham came out of the gates flying, something Liverpool last saw at Old Trafford against United. It looked to put Liverpool in a strange position-absorb pressure, maintain possession, look for cracks in the Fulham defense. And to Fulham's credit, there were few cracks. Andrea Dossena's effort from the edge of the box forced a good save from Mark Schwarzer, and the resulting corner saw a Martin Sktrel shot deflected first off Dossena's head, then off the crossbar in the 10th minute, but that was all Liverpool could claim in the way of attack early. Xabi Alonso did most of the searching, spraying long balls forward at every opportunity. This from the team that started off like gangbusters against Villa last go-around and hung 9 on Madrid and United. Slowly but surely Liverpool started to surge forward, and once they hit their stride it didn't stop until the halftime whistle blew.

Fernando Torres forced Schwarzer into another good save in the 23rd, and then it was Xabi Alonso on the volley in the 32nd that hit the crossbar. Torres hit the post in the 35th and two minutes later Dossena hit the bar after an inch-perfect cross from Steven Gerrard. It really did look only a matter of time before Liverpool found the net, but at the half it was 0-0. A different feeling than previous matches that entered the half 0-0; Liverpool always looked the more likely side to score and seemed to have found their groove. 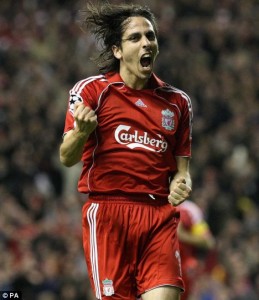 The second half was a much different affair. You could say that Fulham were better, but they had little to show for it. They were able to put together a few good attacking runs, but never threatened Pepe Reina's goal. It was mostly a matter of Liverpool having the same old troubles--loads of possession but no way to cut through a stingy defense. The entrances of Ryan Babel and Yossi Benayoun saw the addition of pace but didn't bring an immediate solution. Benayoun put an effort into the side netting in the 90th after a great dummy to trick two defenders and Babel created a few corners with forward runs, but it looked destined to be 0-0. In the second minute of stoppage time, though, they found the solution. When Ryan Babel cut back towards the middle and passed to Steven Gerrard, Brede Hangeland knocked the ball away, but there was Yossi Benayoun on the right side of the box. The Israeli controlled well, taking one touch, and then fired across goal with effort that left Schwarzer with no chance. 1-0 Liverpool. 3 points in another must win. Cue ecstatic honking.

It was all around an above average, but not spectacular, effort--Torres and Gerrard looked dangerous at times (mostly in the first half), Alonso controlled the midfield, and the defense contributed to another clean sheet. I was a little shocked that Dossena got the start on the left side, but he figured heavily in a couple of the best chances of the first half. I thought Insua was a little shaky in the first half, but he settled down in the second half and was solid at left back. Obviously Benayoun made the impact of the game as a substitute, and Babel impressed again after coming on. It's almost intoxicating to see Liverpool chalk up result after result. Or it could be that I'm drinking. Either way, I can't wait for Wednesday. Bring on Chelsea.