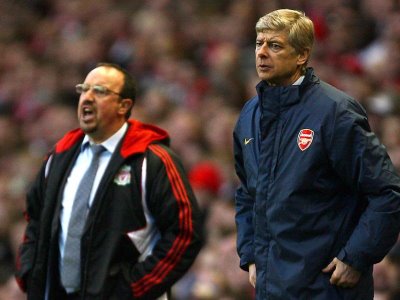 After the dust settled from last week, here we are. On paper this is clearly the biggest challenge Liverpool will have the rest of the way. And, cue hyperbole, each match now is the biggest match of the season. If Liverpool are to have any hope at nicking the title from United they need all three points. It certainly won't be easy, as Arsenal are currently the top side in the league on current form. Liverpool are right behind them, though, and are looking to continue a goal-scoring glut that's seen them score eight goals in their past two matches.

Most of the pre-match buildup has been focused on who's missing--most notably for Liverpool, Steven Gerrard is still struggling to find fitness. His groin has been niggling off and on all year, and it would have been great to have him in this stretch. The side has covered for him admirably and I'm hoping Tuesday will be no different. Gerrard is obviously one of the most influential players in the side, but with the emergence of Yossi Benayoun as a consistent performer Liverpool have missed their captain *less*. All signs point to the rest of the squad being healthy and as a result there should be few surprises in the starting eleven.

Arsenal is missing a hefty amount of their talent, with the latest body count at eight, including Emanuel Adebayor and Robin van Persie. As I mentioned, they're the top team in the league on current form with 16 points in their last six matches. They'll undoubtedly miss Adebayor and van Persie, but they are a side that is capable of taking the game to Liverpool. The Reds have struggled to defend on the counter recently and Arsenal are a side with pace and skill to spare. Even missing two strikers Arsenal can put out an imposing attacking side--Fabregas, Nasri, Arshavin, Bendtner, Walcott, Eduardo...big time names with the talent to give Liverpool trouble.

Arsenal are the only side in the top four that Liverpool haven't defeated this year after doing the double in fine fashion over Chelsea and Manchester United. Robbie Keane salvaged a 1-1 draw earlier in the year with a superb half-volley, but other than that Liverpool were unable to get much going. As we've seen recently, though, Liverpool can take it to anybody in Europe. It's no exaggeration to say that this match could explode with an early goal...let's just hope that if it does it ends with Liverpool on top.