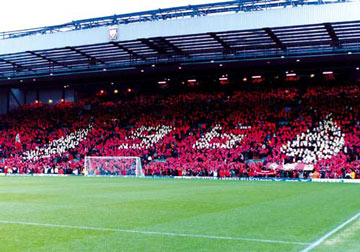 It's nice to get back to reality, even if reality is overshadowed by a difficult time for the club. The middle of April is always a meaningful time for Reds fans, and this year takes on special significance. April 15th is the 20th anniversary of the Hillsborough disaster in which 96 Liverpool fans lost their lives. The official website has been updating its Hillsborough content regularly leading up to the service on Wednesday, and the Justice Campaign also has thorough content about the disaster itself and the events that have transpired since. The pre-match tribute on Saturday was well done, and I'm sure Wednesday will be equally moving.

On the pitch, Liverpool put on a sparkling display Saturday against an admittedly poor Blackburn side. nate at ohyoubeauty has a match recap that sums it up nicely. Four nil was kind to the visitors, who looked out of sorts and posed little threat at any point in the match. I knew the result before I was able to watch, but I was about as impressed by Liverpool as I was discouraged for Blackburn. Liverpool got forward with ease throughout the match, but it was difficult to tell if Liverpool are that good or Blackburn are that bad. Probably a balance of both. The big takeaway for me, besides the first goal from Fernando Torres that got half the women in attendance pregnant, was the play of Insua and Agger. Insua continues to churn out quality performances when he's given the opportunity, and the third goal from Agger was an absolute scorcher...there has to be a place for him in the squad, right? 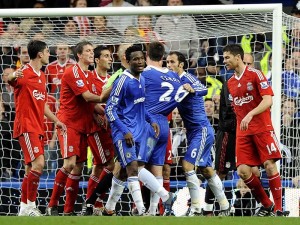 And then there's tomorrow. I'm of two minds here...part of me says it's over and that's fine, Liverpool need to concentrate on league. If Liverpool continue to pour it on it league, they have a great chance to nip the title at the end. And 3-1 in the first leg begs for Liverpool to focus on league.The problem with that, though, is that a league title is not in Liverpool's to win. United keep getting the points they need, thanks in large part to Nivea for Men hair gel. Plus Chelsea laid the wood to Liverpool last Wednesday, and nothing would be sweeter than earning the unlikeliest of results tomorrow at the Bridge. Liverpool will have to be on top attacking form, and the return of Steven Gerrard could be a huge boost.

Despite the disappointment of last Wednesday, I'm excited for tomorrow. I'm always excited for European nights with Liverpool. Mostly because of the way things have gone the last few years, I feel like Champions League ties always hold something special. Could be an early goal, maybe additional steel from a good weekend result, definitely inspiration from a fan base coping with an annual time of grieving. These are the times when it's great to be a Liverpool fan, and I'm hoping we're in for something special again tomorrow night.

Tomorrow, Stamford Bridge, 2:45PM EST. Liveblog on, maybe over at the Champions League Offside, maybe here. Come on you Reds!