"Sometimes I need what only you can provide -- your absence."

Share All sharing options for: "Sometimes I need what only you can provide -- your absence."

The three avid readers on this site know that I've been posting pretty regularly over the past month, so apologies for the absence since Sunday. Busy week of school and pretending to be important and blah blah blah. Plus I despise international breaks. I'm a big advocate of the "pull and pray" technique, both in absence of other methods of contraception and when it comes to Liverpool's players heading out for international duty. I don't even know what that means. 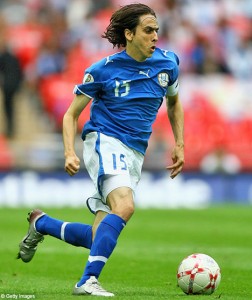 With most of the squad back at full fitness and goals rolling in like hot cakes, the international break came at a lousy time. Most of the starting eleven will feature at some point in the next week, with the Gerrard v. Skrtel matchup the only fixture that will pit current Liverpool players against one another. That's not counting the England v. Ukraine match, in which our prodigal sexy-chested son is out to break English hearts. I'm not sure of his European pedigree, but he apparently doesn't want to come back to Liverpool, so best of luck Samson. Beware of women wearing leopard-skin tracksuits, they're only after the virility that your flowing golden locks can bring. Gah, too late! Elsewhere, Liverpool's rogue Israeli is heading out to seek World Cup qualification for his country for the first time in 39 years. Apparently that's a no-no. I'm all for it, unless he gets hurt, then what a selfish asshole. For a full workup on the Liverpool players out on international duty, go here. For the opportunity to lose your appetite and any chance at performing sexually in the next month, go here.

nate over at Oh You Beauty broke down Liverpool's results this year after international breaks, potentially jinxing any future successes and clearly putting his own self-serving interests in fame and fortune above the needs of the club. And he still won't capitalize his name.

Liverpool has re-signed their technical staff, with Benitez stating that he wanted this sorted out quickly after signing his new deal. Agreed that continuity is a good thing, plus you have to keep Xavi Valero around if he's willing to listen to you on the phone during a game.

On the business of Rafa, he's flat-out denied an interest in David Silva while telling Riera to knock it off with the whole bipolar thing. A good point, considering he was head and shoulders above against Villa last week and completely opens up a match when he's on form. That helps things.

And lastly, consider this my pre-emptive reaction if any of Liverpool's players get injured this week (Language NSFW).