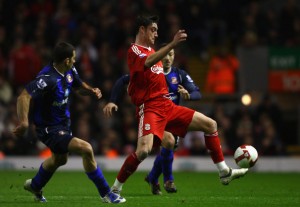 Liverpool are, beyond a shadow of a doubt, the best team in England on current form. No question about it, won't listen to any argument to the contrary. No team has been more impressive over the past three weeks, no team has scored as many goals, and no team has humbled opponents as comprehensively. If it weren't for Barcelona, I'd say Liverpool are easily the best team in Europe, and even that doesn't seem too far-fetched. This spell of remarkable form comes after a few months of maddening inconsistency--three straight draws, beat Chelsea and Portsmouth, draw with City, beat Madrid, lose to Middlesbrough.

Telling question by steven. in the comments of the liveblog: Is this the same squad that drew Stoke City twice? Can't be. Or yes. Slightly confusing and consistently frustrating. Recently the most difficult part about this has been that Liverpool looked to be peaking at a time when the title was out of their hands. After this weekend, though, the title talk is very much alive and Liverpool look ready to take on all comers.

After the results in London yesterday, Liverpool were charged with clawing back into the title race. Aston Villa came in needing to match Arsenal's result, and with the side struggling to find form you always knew this match had the potential to explode. Rafa played what is arguably his first-choice eleven, boosted by the return of Alonso and Arbeloa. Martin O'Neill similarly sent out a side looking to attack, with Heskey and Carew up front. So often important matches between top sides disappoint, but from the opening kick this one promised to deliver.

Liverpool picked up where they left off last weekend, flying forward in numbers. The breakthrough came in the 8th minute, after Nigel Reo-Coker fouled Albert Riera on the left side. Steven Gerrard swung in the free kick, and Xabi Alonso's glancing header smashed off the bar. Dirk Kuyt laid in wait, and he made no mistake smashing the half-volley through four Aston Villa defenders. An early goal was just what Liverpool wanted, and it's just what they got. 1-0 and feeling good.

For a team that has been struggling recently, Villa impressed with their response. After seeing their starting eleven the aerial threat was obvious, and they looked to take advantage for much of the first half. It seemed to be only a matter of time before they equalized, with Carew testing Reina with his left foot and his head. Looking back, it was really Pepe Reina who got Liverpool to the point that they could pile it on. And it would only be a matter of time before they did just that.

Out of nothing Liverpool had their second. Reina booted it down the pitch in the 33rd minute, and the bouncing ball found an umarked Albert Riera, who volleyed past Friedel to make it 2-0. Gareth Barry trailed off behind Riera, who still had work to do with Davies sliding in, but the hit was perfect. Within ten minutes Liverpool had their third, and it was Riera again who directly contributed. In the 38th minute Dirk Kuyt played a long diagonal ball across the pitch, and Riera controlled expertly only to be hacked down by Nigel Reo-Coker in the box. Gerrard to the spot, and 3-0 headed to the half.

The second half was mostly a formality, and Liverpool added a fourth and fifth to sex it up. The fourth again came off the boot of Gerrard, wrong-footing Friedel on a free kick in the 50th minute from just outside the box. Gerrard got his hat-trick in the 65th on another penalty after Friedel tripped up Torres. You have to say that it was a harsh red on Friedel--Torres took a heavy touch, Friedel charged and couldn't get out of the way. Always a penalty, but the red was a terrible decision. Guzan came on under the worst of circumstances-in front of the Kop, charged with saving a penalty from Steven Gerrard. 5-0, humiliation complete.

Another impressive effort by the entire squad, and while it hurts me to say it, Torres was probably the weakest link today. As I mentioned in the liveblog, I'm hopeful that's a result of tight marking or an off-day rather than continued fitness concerns. Gerrard had the hat-trick, but wasn't my man of the match. It has to be Albert Riera, who absolutely blistered Villa today. Could have partly been Reo-Coker as a makeshift fullback, but James Milner was Villa's best on the day in attack and tracking back, and even he couldn't deal with Riera. Kuyt was a close second, with the workrate and return to show for it. Alonso and Masch had continued success in midfield, Arbeloa had a fantastic return to the squad, and the rest of the back line did their part to keep the clean sheet.

Towards the end of the match Alan Parry asked Efan Ekoku who the best side in the Premier League was, and he responded by stating that even die-hard Liverpool fans would have to say Manchester United. Three weeks ago I might have agreed. But this Liverpool squad, nearing their peak, looks unbeatable. Rafa has found his preferred eleven and has begun to experiment with them tactically, with unbelievable results over the past few weeks. The international break will hopefully be an uneventful one-Liverpool need everyone at full fitness for the final haul.

Two weeks off, then eight matches in league before it's all said and done. It's still out of Liverpool's hands, but it's a lot more in-reach after a magical few weeks.