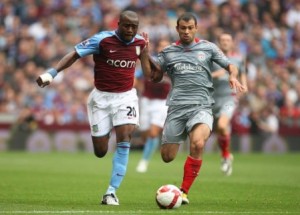 For as much as it was promised that the beating Liverpool delivered United last Saturday would be a "good thing," by all accounts Fergie's men were out of sorts at Craven Cottage and were beaten 2-0. Two men sent off and Ronaldo at his diving-and-complaining best...doesn't get much better than that. Things only got better for Liverpool as Tottenham staved off some late pressure by Chelsea to earn all three points through Luka Modric's strike. One of the best days all year for Liverpool without even taking the pitch-seemingly back in the title race, with their closest rivals unexpectedly dropping points.

Unfortunately, watching others drop points is the easy part. Tomorrow Liverpool have to do the work themselves, and it's against a side that I really enjoy watching. I try to catch as many of Aston Villa's matches as I can, and I'm continually impressed (spare the past few weeks). Their surge to the top four has been great to watch and would be a great thing for the Premier League...as long as it's not at Liverpool's expense. For as fun as they are to watch playing other teams, though, the match with Liverpool earlier this year wasn't exactly top-shelf stuff. Fernando Torres' hamstring reared its ugly head for the first time during the 0-0 draw and Liverpool's 100% start was ruined. Not quite a bore draw, but pretty close. Plus Liverpool wore red socks with the grey strip, which proved to be an aesthetic nightmare outdone only by the atrocity that was grey/red/red at the Emirates. Luckily Liverpool are home tomorrow. 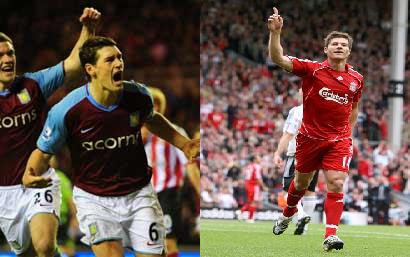 You could say the two clubs are going in opposite directions--Liverpool have done well for themselves over the past few weeks in Europe and domestically, while Villa crashed out of the UEFA Cup (with intention, no doubt) and have stuttered in league. The past few weeks have also seen the resurgence of the Gareth Barry saga, with Martin O'Neill stating his certainty that he could lose the midfielder if Villa don't qualify for the Champions League. I'm not sure that Liverpool need Gareth Barry after the season that Xabi Alonso has put together. Rumors were rampant that Rafa was shopping Xabi before the August transfer deadline passed, but since that time Xabi has arguably been Liverpool's player of the year.

It will be interesting to see if Liverpool come out and attack tomorrow. I'm not sure that Villa are well-equipped enough defensively to deal with an in-form Fernando Torres...and Luke Young seems to agree. The type of football Liverpool have been playing the past few weeks is the kind that I've always wished for-pressing in attack from the outset and defending when necessary. Under Rafa Liverpool have usually placed more emphasis on shutting other teams down and show urgency in attack when an equalizer/winner is needed, but over the last few weeks Rafa has shown an ability to implement attack-minded tactics as well. With Villa limping in and Liverpool flying high, an early goal could kill the fixture. Villa are capable of getting up and down the pitch quickly, though, and Liverpool have only looked vulnerable on the counter recently. I'm guessing that this isn't lost on Rafa, and I don't think tomorrow is the day for Villa to take all 3 points for the first time since 1999. Or any points.

Arbeloa and Alonso are expected to be fit, as is Yossi Benayoun. Riera hasn't exactly been setting the world on fire lately, but I'll take him over Babel, at least for the first 65 minutes. For all the rotation that's occurred over the past few years, the spine of Liverpool's squad has largely remained the same this year barring injury concerns. Up the middle Liverpool are as strong as any side in the league, but they are playing with confidence all over the pitch at this point. A win tomorrow would only strengthen that confidence, something that Liverpool will need in spades down the stretch.

Liveblog for the lead-in and match tomorrow.