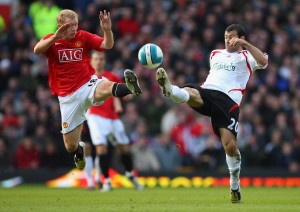 A match that, in all fairness, doesn't really need much build-up. Both teams have everything to play for--Manchester United can effectively kill Liverpool's title dreams, which will have been done for the fourth time in the past two months, and Liverpool can edge their way back into said race if they find a way to victory. Both teams are coming off midweek success in Europe--Manchester United out-uglied Inter, and Liverpool played what was their match of the season against Real Madrid. And in case there was any doubt about the derby-ish nature of this tie, Rob over at EPL Offside broke things down historically and provided a great reminder about the importance of this match to both clubs.

Last time Liverpool visited Old Trafford, things...did not go so hot. United were able to take the lead through Wes Brown's 34th minute header, and from there things went bad to worse. In all honesty Liverpool never looked threatening, but any confidence the Reds had was swept away by the dismissal of Javier Mascherano just before the half. It was a moment of madness for a hot-headed player, and he should have known better, but Steve Bennett hasn't exactly been lighting up the charts on the Kop 10's favorite referees. United found the back of the net twice more through Ronaldo and Nani and played Liverpool off the pitch. A disappointing effort that continued Rafa's unfortunate record at Old Trafford, especially when pre-match hopes were so high.

Cue high pre-match hopes. And why shouldn't they be high? Trouble in the Premier League recently, you say? Aren't you the one who was whining about Champions League success not necessarily being enough? Could Liverpool still challenge for the title? When will you put up a picture of yourself chopping wood shirtless? All fair questions. But Liverpool have defeated Manchester United once already this year, in a performance that was actually quite comparable to the Real Madrid game. More/later drama, but Liverpool displayed a flowing attack that hadn't been seen for some time and completely controlled the pace of play. Sure, this one will be at Old Trafford, but Liverpool are still capable of taking the match to United. As was the key in the fixture at Anfield, an early setback cannot ruin Liverpool's approach. Easier said than done, but absolutely necessary.

There are so many questions about niggling injuries for Liverpool that guessing at a squad is a difficult task. Arbeloa was just fit in time for Real Madrid, same story with Torres. This would be largely the same squad that took the pitch against Real--Aurelio has been fighting fitness, and with Insua playing well of late I can see him in the starting eleven. Babel played the role of supersub at Anfield earlier this year, and could play a similar role tomorrow. Riera showed signs of getting back to form against Sunderland, and United earlier this year was his coming out party. Er, not in that way, but yeah, he played well. Alonso and Masch controlled the reverse fixture as well, and as long as Masch stays cool, which he's stated he will, their influence could decide the match. 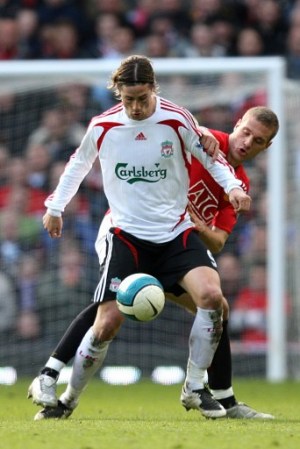 I can't say enough how excited I am for this match after the performance midweek. It's been all over the place how confident the squad is heading to the weekend, and regardless of how it impacts the title race this is a huge fixture. This isn't a European night, and it's not at Anfield, but the performance against one of Europe's greats has to have sparked some optimism amongst the squad and staff. As I mentioned, it will be paramount that Liverpool remain resilient, something the squad has done time and again this season. Manchester United are certainly a step ahead, of everyone in the league really, and control their own destiny. In my mind the wild card could be the performance of Fernando Torres--absent earlier in the year when United came to Anfield, and largely absent when these teams met last year--who is capable of taking the match to United's defenders like they haven't seen. Ferdinand and Vidic were dominant at Old Trafford last year, but if his performance on Tuesday is any indicator, Fernando Torres can take it to any defense in Europe.

The official website now has the pre-match interview with Rafa...mostly standard stuff about the importance of the fixture, hoping we can win...nothing about pummeling Sir Alex or chop-blocking Wayne Rooney on his way out of the tunnel. Kind of disappointing.

A couple of months ago Martin Samuel wrote this piece in the Daily Mail selecting a squad from Manchester United and Liverpool...and now Norman Hubbard over at Soccernet has done the same thing. My mash-up starting eleven? In the words of Kenneth Parcell, "I don't believe in hypothetical situations, that's like lying to your brain."

And Wayne Rooney said that he hates Liverpool, and Sir Alex has told the press that they are a bunch of liars and Liverpool fans are ugly and mean to his Wayney. Who cares really, the more passion in the match the better I say.

Amazing what a good run-out does for Ryan Babel's confidence...first he claims that he needs to be "more selfish" and then he...wait did he say more selfish? Is something lost in translation? Look, he was good against Real the other day, but up to then his performances haven't exactly exuded selflessness...he was trailing only Arjen Robben in flailing cutbacks that led to a loss of possession. So more selfish is not my solution...but then he does say that United can be beaten and the squad should be confident. Back to even.

Phillip Degen was injured again last night as the reserves drew with the United reserves 2-2. I watched most of this match and felt bad for Degen; sounded like there were plenty of boos ringing through the Halliwell Jones Stadium as he limped off. Other than that a somewhat unremarkable match...Danny Walbeck and Fabio da Silva both scored nice goals, and the Reds got theirs through Degen and Dani Pacheco, the latter of which beat Thomas Kuczack at the near post. You have to wonder when the Degen experiment ends at Anfield...hasn't had a good run of fitness since coming to Liverpool.

Kickoff tomorrow at 8:45 EST from Old Trafford, liveblog of match build-up and the match itself from around 8:30 EST.