FULL TIME Liverpool completely overwhelm the Spanish champions and progress to the quarterfinals. 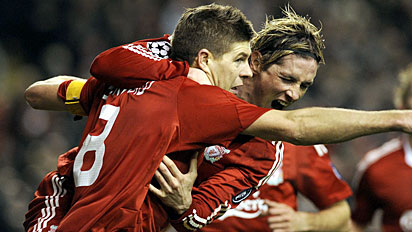 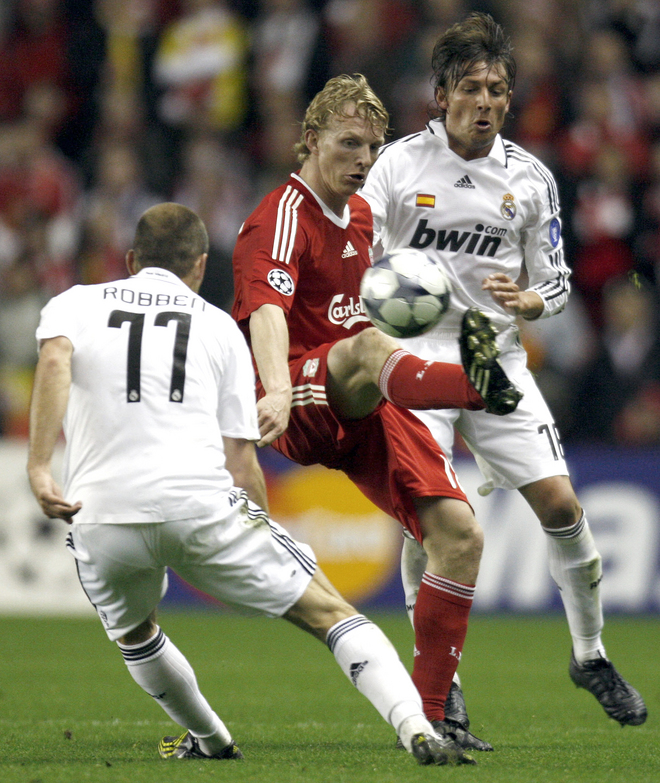 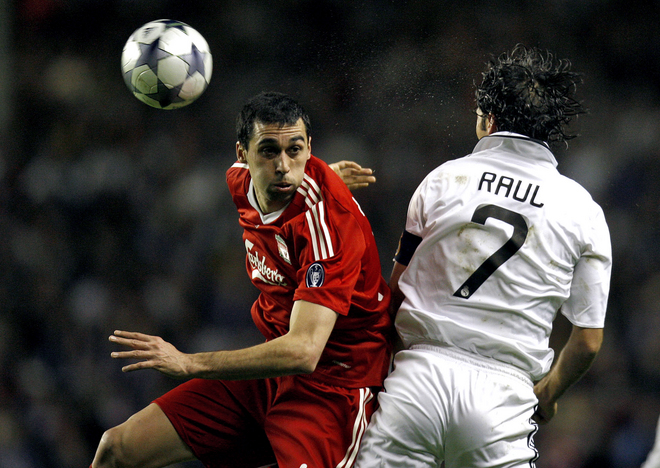 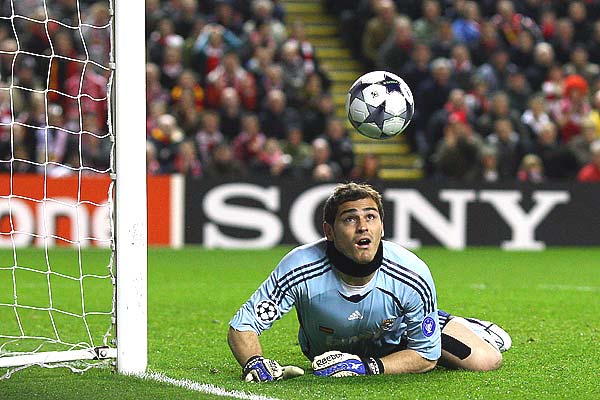 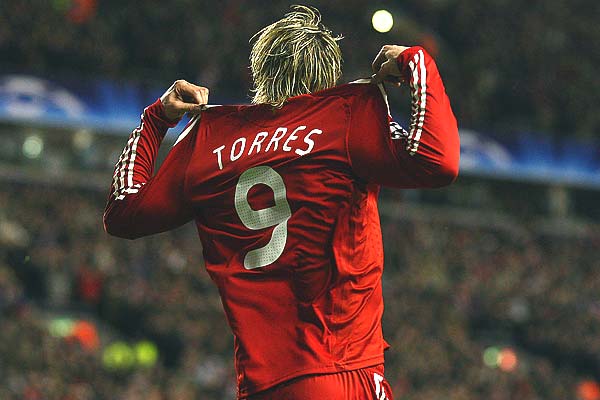 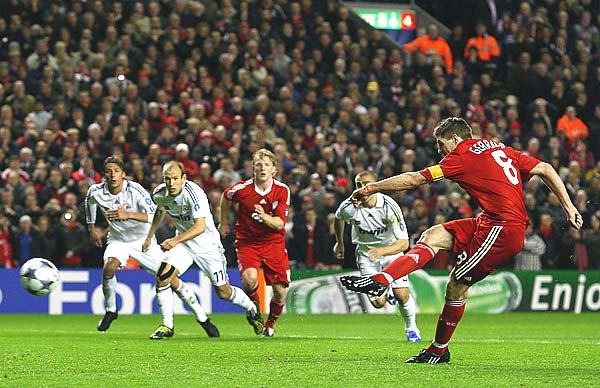 90'+3 Poor foul by Sneider on Aurelio...final whistle anyone?

90'+2 Lucas has a strike deflected after a penalty shout for Skrtel on the edge of the box.

GOAL Dossena strikes in to complete the humiliation...got to feel bad for Iker Casillas tonight.

** Looks like Chelsea are through...Juve will need two more to win the tie. Villareal also look to have booked their spot in the quarterfinals, scoring two away at Pana.

83' Higuain punches in past Reina, but he's offside. Torres is finally subbed off after a really outstanding performance. He looked fully fit for the first time in awhile. Dossena on to pick out a lucky fan at the back of the Kop.

81' Another great chance for Torres, and another great save by Casillas. Without Casillas you have to believe that it would be 5-0 at the least.

79' Kuyt bends one in, but Casillas snatches it down. Not much of note going on, the last few minutes are little more than a formality. Raul heads over.

76' Gago again with a chance, and he's rewarded with getting subbed off. The lead singer from Fallout Boy comes on...oh that's Guti.

73' Gerrard is off, Spearing on for him, good to see one of our youngsters getting some action in a big-time fixture. Heck of a night for the skipper.

72' Looks like Spearing will be coming on, not much in the way of action...some back and forth, but Liverpool haven't been threatened in the least.

66' Foul on the edge of the box...for as much shit as I've given Van der Vaart, he's been great after coming on. But his farts can still clear a bench.

65' Carragher heads clear after a nice touch by Van der Vaart...corner is cleared without danger.

63' Marcelo apparently had a blade sticking out the front of his boot judging by Masch's reaction to the challenge.

** Pana have levelled the match and the tie...Chelsea still up 2-1 agg.

60' This is a star-studded event, Lucas with his newly shorn locks, looking frighteningly like Ellen Degeneres, is coming on for Xabi Alonso. Good for him.

57' Real showing signs of life, Ramos' cross deflected and saved by Reina. Babel does well at the other end to free himself, but no joy in the box.

** Couple of updates--Chelsea are up 2-1 on agg. through Essien's 45th minute goal, Villareal up 2-1 on agg. against Panathianakos, and Bayern are doing okay for themselves.

54' Almost cocky play now by Liverpool, backpass from Kuyt to Gerrard, whose strike is saved well by Casillas again.

** We had dreams and songs to sing, of the glory round the fields of Anfield Road...

51' Raul tries the volley but sails it...great cross by Ramos, maybe a head would have worked there?

50' Liverpool don't seem to be slowing down, still pushing forward. Whatever was said before the match needs to have been recorded and replayed before every match.

GOAL Gerrard!!! Babel with good work on the left gets it in to Gerrard, who makes no mistake and buries it into the top corner past Casillas. Game over.

46' Second half started...looks like Marcelo is on for Arjen Robben...I'm confused?

** Torres' turn in the 4th minute gets prettier and prettier...if he would have finished it may have been goal of the season so far.

HALFTIME Little needs to be said about Liverpool's first half performance...composed and confident, they overwhelmed Real Madrid for the first 30 minutes of the match. Fernando Torres had a few moments of absolute brilliance and looked fully fit. Can't pick out any areas for improvements in the second half. A bit disappointed in Masch for the foolish yellow. He's got to mature or he's going to continue to punish himself and the squad with his temper. If the last few minutes of the first half are any indicator, Liverpool are going to be content to sit back and challenge Real to put up a 3-spot, something no team has done at Anfield in the Champions League in...ever?

45'+2 Raul gets a half-chance off but not anywhere near threatening.

** Two minutes of added time...Liverpool's possession is so controlled right now, really enjoyable to watch. Shades of the performance against Manchester United earlier in the season.

45' Liverpool corner at the end of the half...cleared away with no danger.

44' Mascherano booked...hot-headed and foolish. Come on Masch. He'll miss the potential first leg of the quarterfinals.

42' Bigtime lull in play...both teams look to be playing for halftime...and cue a quick attack for Real, Reina with a good save. Alonso fouls Pepe for his liberal viewpoint.

40' Quasimodo flies one from the edge of the box after another good spell of possession in attack.

38' Torres looking strong in the air as well, wins a header off Reina's free kick. Rumors of his injuries have been greatly exaggerated.

32' Heinze and Torres tussle a little, Heinze with some gesturing...but I don't know how threatening you can be when you look like James Blunt.

30' And I am immediately punished for that thought, Sneider goes close on the free kick, Reina with a great save.

** Three-nil on aggregate...have Liverpool killed the tie in the first 30 minutes?

GOAL Steve Gerrard, Gerrard buries the penalty...is that it?

26' Foolish challenge by Gerrard lifting his boot at the end, results in a deserved yellow.

24' Torres again with an unbelievable skill, picks out Gerrard who hits it on the sliding volley, Casillas again with a good save. Can't say enough about the way Liverpool are playing right now.

22' Nutmeg on Fabio Cannavaro by Gerrard, the free kick is headed towards goal by Skrtel, with another great save by Casillas.

18' A goal early is exactly what this tie needed...we could see this match explode. Yellow card for Pepe...served.

18' Great work by our aesthetically-challenged Dutchman to pick out Torres in front of goal. Suck it Pepe.

GOOOOOOOOOOOOAAAAALLLLLLLLLLLLLL Fernando Torressssss!!! Pepe with a big time error, Kuyt to Torres with the finish! One-nil to the good!

15' Slightly dangerous buildup by Real, but nothing doing. Reina with a big clearance, but Torres unable to control at the other end.

13' Odd, Pepe clips Torres from behind. Tell me Pepe doesn't look like a Portugese James Carville. That's not a flattering comparison.

11' Things slowing down a bit...but Liverpool have maintained possession and have looked about as good as they have all year in attack. Not getting ahead of myself, but I'm optimistic.

9' Sergio Ramos gets his head to a free kick at the other end, but it sails wide.

7' Liverpool looking really dangerous...foul on Gerrard just outside the box...Gerrard to take...low drive that is controlled by Iker Casillas, who has made more saves in the first 7 minutes than he has in the past 4 weeks domestically.

5' Scramble in the box, Babel comes in late and is charged with a foul. Hell of a start by the Reds in the first 5 minutes.

4' I'm going to have a heart attack soon...Mascherano this time. Is this happening?

4' Torres so close! What a phenomenal touch...wow...that is some big time skill. I gotta go change my shorts.

2' Babel gets free outside the box, but his shot is deflected. So was Rafa not bs'ing about that whole looking to score thing?

1' Torres looking good on the attack with some fancy dribbling and good pace...encouraging enough. Gerrard's delivery from the corner is good, but cleared.

KICKOFF Away we go...COME ON YOU REDS!!!

** I wish I was sitting in an Antarctican(?) shack watching the game with a pony keg of Heineken.

** Did anyone else get seriously disturbed by the infomercial guy plugging ESPN360 with his bearded wife and daughter? Welcome to my nightmare.

** Get that pulse going, we're about ten minutes away...

** Why can't there be a decent lead-in show for the Champions League? Bob Ley talking about famous athlete foreclosures isn't quite what I had in mind.

** Drink of choice: Bloody Mary, followed by Coors Light(s). Jersey of choice: 2006-2007 Steven Gerrard home jersey. A good year in the Champions League and the first Liverpool shirt that I owned.

** A little different look for Real today, as expected, a more offensive-minded starting eleven. Corey over at the Real Offside was damn close with his prediction--only missing Sneider in place of Marcelo.

Looks like Arbeloa was fit enough to get a start, and that's got to be a boost for the Reds. He's performed well in the Champions League the past few years--his debut against Barca two years ago was much heralded, and while he hasn't always performed at that level, his performances of late have been encouraging. And it seems Rafa was playing it close to the chest regarding Torres' fitness...let's just hope that this isn't a rush-job. Less than an hour now!