Share All sharing options for: Is Champions League success enough? 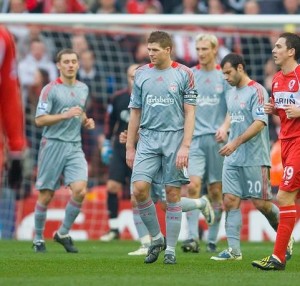 A day removed from a performance everyone wants to forget and 5 days removed from a performance nobody wants to forget. The 2-0 loss at the Riverside extinguishes any flicker of a title hope, making for a gloomy Sunday hangover. Save for Gerrard's performance in the second half prior to walking off injured, there is little to be optimistic about. The team that showed such discipline and character in Madrid was lacking in both yesterday on Teesside. Our young talent consistently looks overmatched and lacking in confidence. For as good as this side was supposed to be this year, and honestly how good they can be at times, yesterday was a glaring example of how bad they can be. This could be the lingering disappointment from the awful showing talking, but at this point it seems that pessimism and negativity reign.

Nothing more needs to be said about the problems behind the scenes at Liverpool, and who knows what role this unrest plays in performances like yesterday's. It goes without saying, however, that it certainly compounds anything that goes wrong on the pitch. A tired performance suddenly becomes an umotivated one due to the manager's problems with the owners. I fall victim to it just as easily as anyone, and the media doesn't make it any easier. After awhile, regardless of your optimism, you start to buy into the idea that Liverpool are a deeply flawed club that aren't doing themselves any favors on the pitch or off. 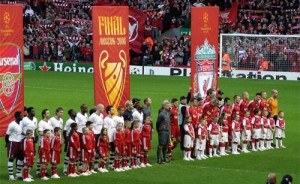 Which brings me to my current thought. Liverpool are well-placed to advance in the Champions League after the 1-0 victory away to Madrid in the first leg. Plenty of work left to do, but if history is any indication, progressing to the quarterfinals is a very good possibility. And few managers are as tactically sound in Europe as Rafa Benitez, particularly when it's time to shut the opposition down. By all indicators the squad will be close to full strength. The real question, though, is if another run in the Champions League could--or should--save what has otherwise been a disappointing season.

For me, success in the Champions League would be little more than a band-aid. The disappointments in league may only be so profound because of the hopes that lasted until January, but they're profound nonetheless. With a manager that has been able to make himself the center of attention at every turn and a boardroom situation that apparently has no clear-cut resolution, lifting another European cup would likely bring only fleeting joy. As fans, we should be so lucky to complain about third in league and the possibility of progressing to the quarterfinals of the Champions League, but with every year expected to be the year, you can't help but feel like that year is a long ways from here.

So what's the solution? Is it sacking Rafa Benitez, a man who's won cups both domestically and in Europe, but can't seem to figure out the Premier League? Does he need/deserve more time? Will things improve with Rick Parry leaving at season's end?

All I know is that right now I feel like Richie Tenenbaum and Raleigh St. Clair rolled into one.

That will effectively end sad-sacking for the time being. Sunderland at Anfield on Tuesday with a chance to redeem some of the negative impact from yesterday's performance.