Share All sharing options for: "I've been thinking, Hobbes..." "On a weekend?" 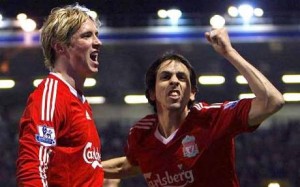 Just rewatched the second half from yesterday's 3-2 win, a few different things stood out. First, Jon Champion definitely messed himself when Hreidarsson headed past Reina.

The commentating in general was so negative, towards both teams to be fair, that it made me want to turn on some emo and dress like this guy. Per my buddy's text message, I listened to the comments following Nugent's goal--Gary O'Reilly with the glib, "Ryan Babel's got to be enjoying this moment" followed by a dynamite drop-in from Champion, "Benitez will likely be under fire for his team selection" and the inspirational "Champions certainly don't go 1-0 down to a team that has won 2 of their last 16." Outstanding.

Next, David James was great the entire second half coming off his line. He disrupted at least 3 or 4 potential chances by charging. Not sure if our passing was too heavy or if he was just that good, but his decision making in that regard was spot on. Conceding 3 was a little more indicative of the mistakes made by Crouch and Distin, the latter of which seemed to be guilty for both the equalizer and winner.

In terms of the formation, starting 11 and substitutions, I think so much has been made of the "tactical genius" of Rafa that every decision is going to be analyzed to the death. Plus he's likely the most stubborn manager in the league, so he's earned both the criticism and the praise he's gotten at various points this year. Things worked out well yesterday, in particular the substitutions, and you have to almost admire the confidence he shows in his decisions. Whether or not that confidence wins us the title is still up in the air. nate over at Oh You Beauty has a great column about all things tactical from yesterday's match. Don't know how it would work when we're at full strength, but I liked seeing Skrtel, Carra, and Agger across the back. Now let's just lock Agger up already.

Babel will thrive now that Keane is gone: I'm not sure how dribbling in circles and giving away possession all while doing your best Charlie Brown impression is thriving. It's still early though, and he's talented enough, I think?

John Barnes Interview: Nice piece from the Guardian about the former Liverpool man turned Jamaica manager. Mostly a sobering interview on some serious topics, but clearly the best quote of the article: "and if you have to kick some guy in the chest like Eric Cantona did, that's what you have to do." If you say so John.

My wife's thoughts on the win: "I miss Torres with long hair." Don't we all.

And lastly, for Possum Jenkins, some Dr. Dog.