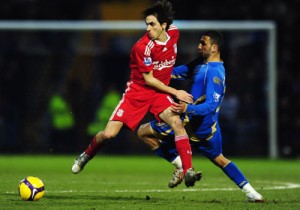 With a new formation and 6 changes to the squad that lost midweek, today was always bound to be an adventure.

The first half was not pretty for either side, with Aurelio's free kick off the upright in the 10th minute and Mascherano's drive in the 26th the only real chances. Babel tended to fall back deep in what was supposed to be a left wing/supporting striker role, and N'Gog seemed tentative and overmatched. Not a good combination for a lone striker. Zeros at the half, a frighteningly familiar scene for Liverpool fans this season.

Portsmouth brought on Kranjcar at the half, and Liverpool brought on Kuyt for N'Gog in the 57th. Liverpool created their best chance of the afternoon shortly thereafter, with Benayoun, who continued to impress with the ball at his feet, jinking through midfield, passing on to Kuyt who crossed well to Babel in front of the gaping net, and what followed was, in Jon Champion's words, “No better chance missed up and down the country this afternoon.” Three minutes later, we were punished.

Crouch freed up Nugent in the 62nd minute, with Nugent finishing well past Reina to go up 1-0. Xabi came on in the 67th for Dossena, and soon after our old striker had gifted us an indirect free-kick from just off the penalty spot. Still not sure how he did it, but Aurelio was able to strike it through Crouch and past Kranjcar at the post. 1-1, and Liverpool had the momentum. Xabi's influence was immediately felt, spreading the ball around and creating space in midfield. Liverpool looked to have taken the lead in the 75th, but Dirk Kuyt was questionably ruled offside after scuffing past James. With Torres on for Babel, it was looking good.

As has been the case this year, defending set pieces conspired against us. Hreidarsson had a free header off a Belhadj free kick in the 78th minute and bounced it past Pepe Reina. In the 85th minute, though, another Portsmouth mistake led to an equalizer. This time it was Sylvain Distin, whose poor footwork in the box allowed Kuyt to smash past James at the near post. At 2-2 the game was wide open, and in the 91st minute Fernando Torres headed in for the winner to finish off an unbelievable fight back. Shades of Wigan and Manchester City earlier in the year, and an absolutely vital 3 points to stay in the title challenge. 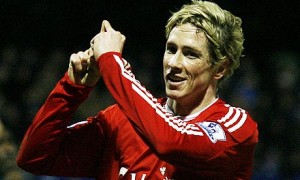 At least right now, the result far outweighs the questions posed by what was largely a shaky performance. I think Xabi coming on brought stability to an attack that previously had none, and Kuyt did well in attack after coming on. Torres' influence cannot be overstated, as he brought pace and power to the Portsmouth back line, who cracked under the pressure. Felt like one of those seminal moments in a season, but only time will tell. We've clearly got the fight to stay in the title challenge, but you wonder how often injury-time winners will decide the result. Let's hope for a restful, healthy international break in front of what promises to be an exciting month.