"You're not a moron. You're only a case of arrested development."

Share All sharing options for: "You're not a moron. You're only a case of arrested development." 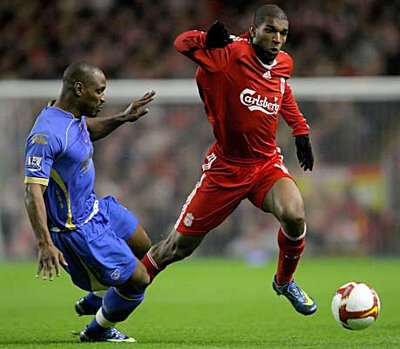 Hello interwebs, I'm Ed, most likely a moron and a case of arrested development, and I'll be helping Nadia out on the Liverpool blog. I figure the best way to start out here is by using other people's work instead of doing any of my own, so let's get on with some links looking to tomorrow's away fixture with Portsmouth, among other things.

Oh You Beauty match preview: As with most of his stuff, a thorough and in-depth preview for tomorrow by nate, who is apparently allergic to starting proper nouns with a capital letter.

Torres Yes? Torres No?: Of course he's tired, but at this point he's our best option up top. Unless the Robbie Keane thing was a big hoax. You know how funny Rafa is and the British media always makes everything so dramatic...who's with me?

Jilted former attacker #1 watch: The accountant, likely stressed for the upcoming tax season, takes the time to single out Crouch as the one to stop. So hopefully he'll shut him down before he files his P50.

Jilted former attacker (that's not so former considering he's on loan but still has the stones to speak freely) #2 watch: Oldish link but still fun to read considering it ends with "They can't say anything to me really." Any bets on his sneaking into the baggage compartment for the return trip to Liverpool?

Jilted former attacker #3 watch: Okay we get it, he wasn't exactly the apple of Rafa's eye, Harry liked him all along, shock and surprise for all, blah blah blah. Good luck, hope you find your goal-scoring touch the rest of the year except 24 May.

Irrelevant link for the day: At this point you've probably seen this, but some classic lines from this poor kid. Reveling in the misery of a stoned 7 year-old, what a life I lead.

And finally, my hopes for the squad tomorrow?
Reina
Arbeloa-Carragher-Hyypia-Aurelio
Benayoun-Alonso-Mascherano-Riera
Babel
Torres

Largely normal back line, Hyypia to deal with Crouch, wouldn't mind seeing Babel in support of Torres to create some space and see what he's got. Will this happen? No. But what a wild idea. I need to calm down.

Lastly, congrats to our Utes' squad, who beat Chelsea 1-0 last night and booked their place in the quarterfinals of the FA Youth Cup, where they'll meet Bolton.

Be back later today or tomorrow, maybe a live blog for a game that probably doesn't deserve it.